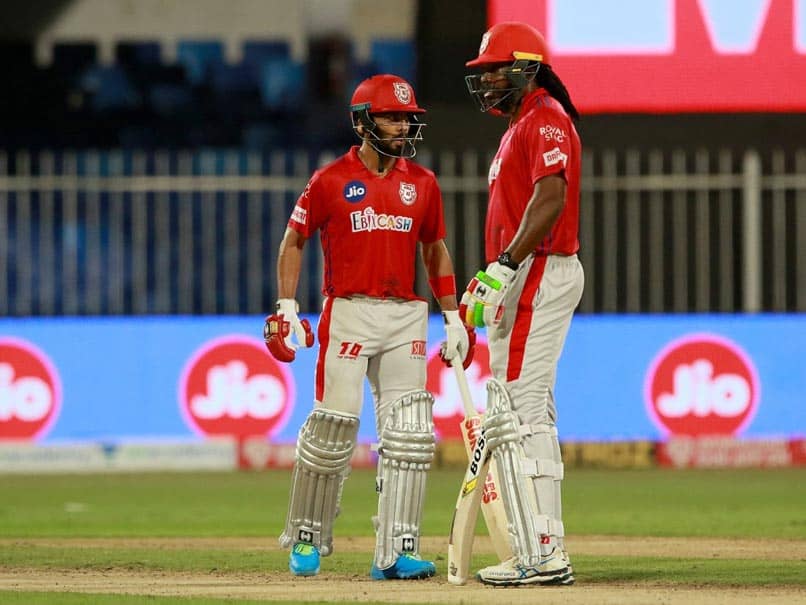 Riding on half-centuries from Chris Gayle and Mandeep Singh, Kings XI Punjab (KXIP) registered a comfortable eight-wicket win over Kolkata Knight Riders (KKR) at the Sharjah Cricket Stadium on Monday. Courtesy their fifth win on the trot, the KL Rahul-led side has moved to the top-half of the eight-team table, displacing KKR from the fourth spot. Chasing a modest total of 150 on a batting-friendly Sharjah track, KL Rahul and Mandeep Singh gave their side a solid start adding 47 runs for the opening wicket.

KKR's mystery spinner Varun Chakravarthy celebrated his maiden call-up to the Indian team by trapping KL Rahul leg before and giving his side an important breakthrough. After that, Gayle combined with Mandeep Singh in the middle and took the game away from KKR, putting on an exactly 100-run stand for the second wicket.

Gayle's aggressive approach allowed Mandeep to take his time in the middle and build his innings and the Punjab batsman, who lost his father on last Friday, did that to perfection, scoring 66 not out off 56 balls.

Gayle made most of the small dimensions at Sharjah and smashed five maximums in his 29-ball 51. By the time, Gayle got out to Lockie Ferguson in the penultimate over, the match was all but over and KXIP romped to as easy win with seven balls to spare, thus bettering their net run-rate to push KKR out of top four.

Earlier, KXIP skipper KL Rahul won the toss and, considering the dew factor in mind, invited KKR to bat. Eoin Morgan's side suffered a major blow as they lost last match hero Nitish Rana on the second ball of the innings for a duck. He got out trying to sweep a Glenn Maxwell delivery but ended up hitting it straight into the hands of Chris Gayle.

The poor start went further downhill as they lost both Rahul Tripathi and Dinesh Karthik in Mohammed Shami's first over. After that, Shubman Gill and Morgan led KKR's counter-attack as they finished Powerplay at 54/3.

Shubman Gill smashed four sixes in his 57-run knock, while Morgan managed only two sixes but batted at a much higher strike rate than his partner at the other end. KXIP leg-spinner Ravi Bishnoi struck in the 10th over to break the dangerous-looking partnership, getting rid of Morgan, who had scored 40 off just 25 balls.

After Morgan's dismissal KXIP bowlers dominated the play and stopped the run flow, forcing the batters into committing mistakes. Barring Ferguson all the other lower-order batsmen turned sorry figure for KKR and they were restricted to a below-par total of 149/9 in 20 overs.

Shami was the pick of the bowlers for KXIP as he returned with figures of 3/35 in his four-over spell, while Chris Jordan and Ravi Bishnoi picked up two wickets apiece.