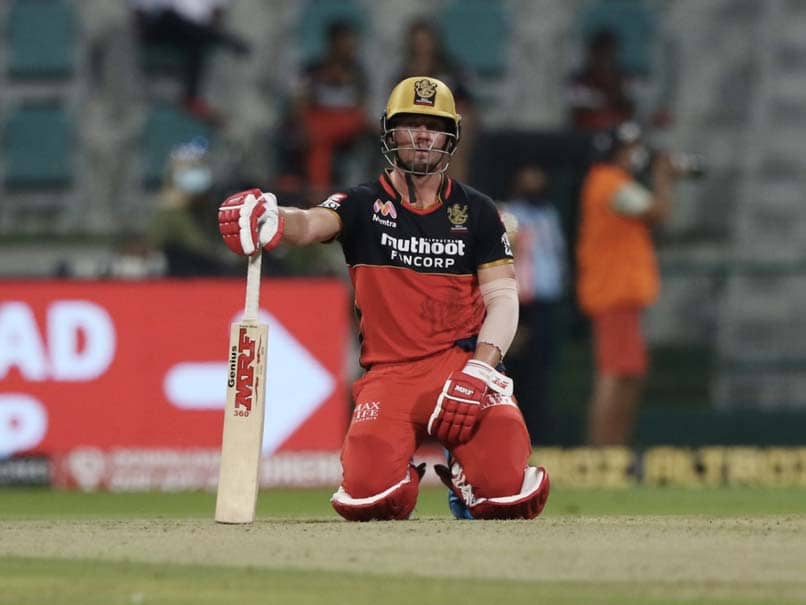 Royal Challengers Bangalore (RCB) shared a video from inside the dressing room for one last time after they exited IPL 2020, following a six-wicket loss to SunRisers Hyderabad in the Eliminator on Friday. While most RCB batsmen struggled against a quality SRH bowling attack, AB de Villiers stood tall during a difficult situation, scoring a gritty half-century. He top-scored for RCB, scoring 56 runs off 43 balls to help his side post 131/7. After the defeat, De Villiers thanked all the fans for their support throughout the tournament and also said "sorry" for not going all the way.

"A memorable campaign came to a disappointing end, but the RCB players savour the final moments together in the dressing room before they fly out of Dubai.  PS: After about 80 consecutive days, this is our final 9 AM video for the #IPL," RCB tweeted while sharing the video.

A memorable campaign came to a disappointing end, but the RCB players savour the final moments together in the dressing room before they fly out of Dubai.

The former South Africa skipper, who was the side's third top-scorer this season, said that they gave their "best shot" and went out with a lot of positives. De Villiers scored 454 runs from 15 matches, with the help of five fifties at a strike rate of 158.7.

"To all our RCB fans, thank you so much for the support. Wish you guys were here throughout the tournament, we could've done with a bit of support from you guys in the stadium but it wasn't meant to be. Hopefully next time. Sorry about not going all the way. We gave it our best shot and we had a lot of fun. There's a lot of positives which we will take on board moving forward. Thank you very for supporting us and always being behind us," de Villiers said in the video uploaded on RCB's Twitter handle.

Addressing his teammates after their loss, skipper Virat Kohli said that the way team fought it out till the end is something that they can be proud of and build on the positives going into the next season.

He also thanked the support staff, especially the coaches for creating a "brilliant structure".

"I think we played some good consistent cricket and fell off at the back end. Probably didn't play our best cricket from that Mumbai game onwards that we played here (Abu Dhabi). Would have loved to go even further and I know fans really wanted us to go further. But some positives this season, guys like Devdutt (Padikkal) stepping up for the team and having a great season as an opener. Siraj coming back nicely after a tough season last year. A lot of positives and something that we can definitely take forward," Kohli said

Aaron Finch, who has played for several franchises in the IPL, said it was the "best group" he has ever been part of in the cash-rich league.

"By far the best group I have ever been a part of in the IPL. Being so close together, being in the bubble forced us all to be really close and really tight, it was an amazing experience," said Australia's limited-overs skipper.

Aaron Finch IPL 2020 Cricket Sunrisers Hyderabad vs Royal Challengers Bangalore, Eliminator
Get the latest updates on India vs Australia Series, check out the India vs Australia Schedule for 2020-21 and Ind vs Aus live score . Like us on Facebook or follow us on Twitter for more sports updates. You can also download the NDTV Cricket app for Android or iOS.