IPL 2020, SRH vs DC: With matches fast running out, SunRisers Hyderabad have no way out but to grab whatever points they can and then see if luck favours them. 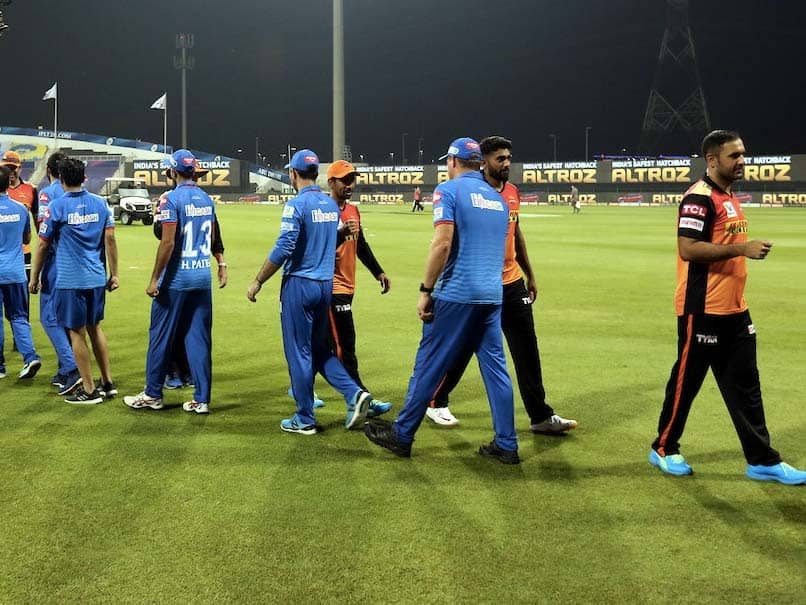 IPL 2020, SRH vs DC: Delhi Capitals will be aiming to bounce back to winning ways© BCCI/IPL

The common thing between SunRisers Hyderabad and Delhi Capitals ahead of the IPL 2020 return match is that both have lost their previous matches. In fact, Delhi have lost two matches consecutively, and while they are still in a good position at second on the IPL 2020 Points Table, they would dearly love to seal off any loose ends now. SRH, other their part, have little else than a big win to plan for and then pray for some largesse from the teams ahead of them. At No. 7 on the table, ahead of only Chennai Super Kings, who are out of the race, SRH cannot afford any slip-ups and even that may not be enough in the final calculations.

SRH have eight points from 11 matches, while ahead of them, Kolkata Knight Riders, Kings XI Punjab and Rajasthan Royals are still scrambling for that fourth spot and the race is open.

While SRH have one match in hand ahead of RR, they are in an extremely dodgy position, and a loss to Delhi will pretty much end their competitive interest in the goings-on.

Performances like the one against KXIP are not helping. Chasing 126 on any pitch, most teams will come out winners. Not so SRH, who conjured up a loss by 12 runs and lost two points that should have been theirs.

The bowling didn't leave much to complain about, but they can do little if the batting collapses, like it did.

While David Warner put up a brave face at the end of the match, he would well know that his side is on the brink, with one foot hanging over it.

Delhi Capitals will qualify for the knockout, since it will now need a cataclysm for them to lose out. But for a side that has been on top of its form, losing two matches on the trot can't be a comfortable position and skipper Shreyas Iyer.

What must hurt more is the manner in which DC allowed Kolkata Knight Riders to come back from a very dodgy position and take points off a side that has done most things well.

Delhi Capitals also had an indifferent outing against Kings XI Punjab in the match before, and the bowling, DC's strongest suit, seems to be flagging, just a shade.

But as things stand now, it will be quite a feat for SRH to recover. They still however can act as spoilers for the rest and that is what Delhi Capitals will be keen to avoid.

David Warner Shreyas Iyer IPL 2020 Cricket Sunrisers Hyderabad vs Delhi Capitals, Match 47
Get the latest updates on India vs Australia Series, check out the India vs Australia Schedule for 2020-21 and Ind vs Aus live score . Like us on Facebook or follow us on Twitter for more sports updates. You can also download the NDTV Cricket app for Android or iOS.