IPL 2020, RR vs SRH: David Warner had words of praise for Manish Pandey and Vijay Shankar who stitched an unbeaten partnership of 140 runs to help SunRisers Hyderabad defeat Rajasthan Royals by 8 wickets. 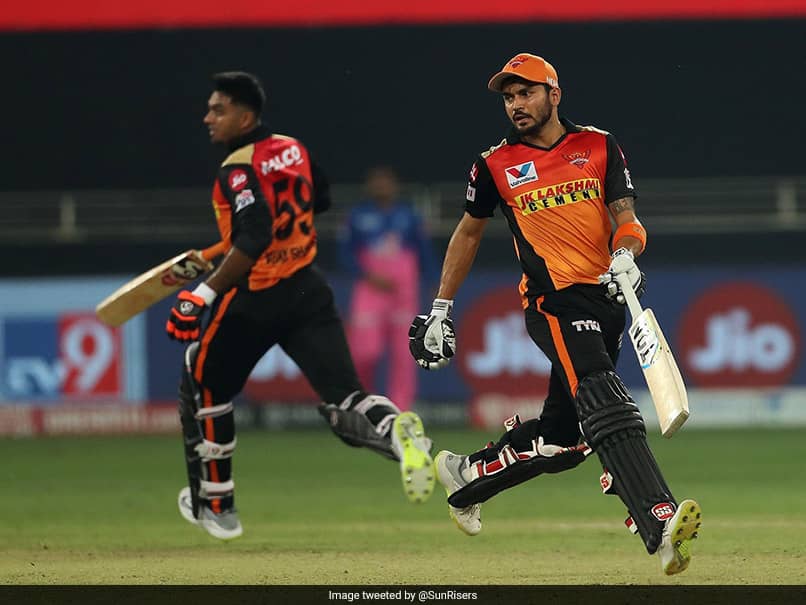 SunRisers Hyderabad (SRH) skipper David Warner was full of praise for batsmen Manish Pandey and Vijay Shankar, who stitched an unbeaten partnership of 140 runs against Rajasthan Royals (RR) on Thursday. The stand helped SRH chase down a target of 155 runs, propelling them to the fifth spot on the points table. Manish smashed 83 runs off 47 deliveries, an innings comprising of four boundaries and eight sixes. Shankar scored 52 runs off 51 balls, hitting six fours to ensure a stable platform for SRH in an important match.

Warner expressed immense happiness following the performances of the duo. The Australian cricketer added that he was "chuffed" for Manish and Shankar.

"For them to come out and play like this, I am so happy for them. They showed they can build a platform for us to get across the line. Or set a big total. I am chuffed for them," said Warner during the post-match press conference.

The SRH skipper further described the team performance as a "stunning" one, hailing the triumph as the kind of game they were "asking for".

"It was a stunning performance. Starts with the toss where you (broadcaster Mark Nicholas) questioned my decision to chase. We were able to bring them back after Powerplay. All in all, the kind of game we were asking for," he added.

Earlier, RR posted a total of 154 runs for the loss of six wickets after Warner won the toss and opted to field.

Sanju Samson (36) was the highest scorer with the rest of the batsmen unable to make their presence felt. West Indies all-rounder Jason Holder was the pick of the bowlers for SRH, accounting for three wickets while conceding 33 runs.

Vijay Shankar Cricket
Get the latest updates on India vs Australia Series, check out the India vs Australia Schedule for 2020-21 and Ind vs Aus live score . Like us on Facebook or follow us on Twitter for more sports updates. You can also download the NDTV Cricket app for Android or iOS.