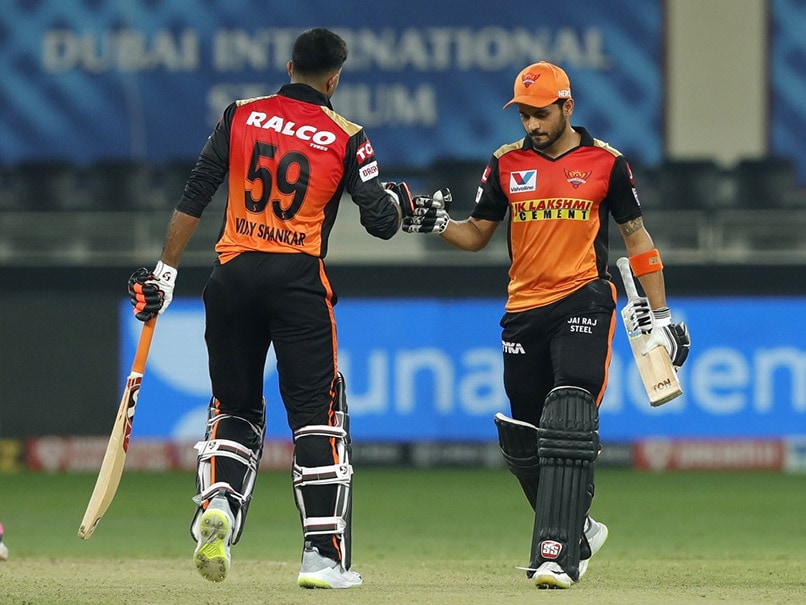 Manish Pandey's unbeaten 83 off just 47 balls and a mammoth 140-run partnership with Vijay Shankar (52 not out off 51) helped SunRisers Hyderabad defeat Rajasthan Royals by eight wickets on Thursday in Dubai. Chasing a modest RR total of 154 for 6, SRH were dealt early blows by Jofra Archer who sent back both openers – David Warner, the skipper, and Jonny Bairstow – inside the first three overs. However, those were the only two wickets RR got through the innings as Manish and Shankar paced their innings perfectly to take their team to a comfortable win with 11 balls to spare.

Archer made Warner (4) edge one to Ben Stokes at slip in the first over of the chase and then bowled Bairstow (10) off the inside edge to reduce SRH to 16 for 2 in the third over.

Manish got stuck into the RR bowling immediately, hitting Kartik Tyagi for consecutive boundaries in the fourth over before taking Stokes for two sixes in the fifth.

Tyagi was in the firing line again as Manish oozed confidence, smashing the rookie bowler for two sixes and a four in the final over of the Powerplay to help SRH finish strong at 58/2, reversing the effects of the two early wickets.

It was all SRH from that point onwards as Manish brought up his 50 off just 28 balls in the ninth over.

With Manish firing at one end, Shankar had the time to build his innings and after scoring just 11 off his first 19 balls, the Tamil Nadu batsman hit leg-spinner Shreyas Gopal for consecutive fours in the 11th over to get things going for himself.

The spinners Gopal and Rahul Tewatia went wicketless and when Archer was brought back for his final over, with 37 needed off 30, Shankar took the pacer for a hat-trick of fours to all but close out the contest.

Earlier, Warner won the toss and asked RR to bat. Robin Uthappa looked good for his 19 off 13 with two fours and a six but was run out on a call by Stokes, who withdrew from the run mid-pitch leaving Uthappa to turn around and scramble back to the non-striker's end, albeit unsuccessfully, as bowler Jason Holder grabbed the ball and got a direct hit.

Sanju Samson (36) walked in at No. 3 and while he tried to make use of the field restrictions by hitting Sandeep Sharma for consecutive fours in the fifth over, Stokes didn't find the middle of the bat and kept mishitting deliveries that were in his slot.

Stokes' out-of-sorts innings and the pressure built by Rashid Khan from one end told on Samson at the other as he was cleaned up by Jason Holder after the big West Indian was thumped for a six on the previous ball in the 12th over.

Stokes (30 off 32 balls) was bowled by Rashid in the next as SRH choked RR in the middle overs. Jos Buttler came in at four but Shankar sent the big-hitter back for just nine runs, getting him caught at point.

Holder, playing his first match in IPL 2020, was the pick of the bowlers for SRH, returning 3 for 33 from four overs.

Jofra Archer IPL 2020 Rajasthan Royals vs Sunrisers Hyderabad, Match 40 Cricket
Get the latest updates on IND vs NZ 2021, check out the Schedule and Live Score . Like us on Facebook or follow us on Twitter for more sports updates. You can also download the NDTV Cricket app for Android or iOS.