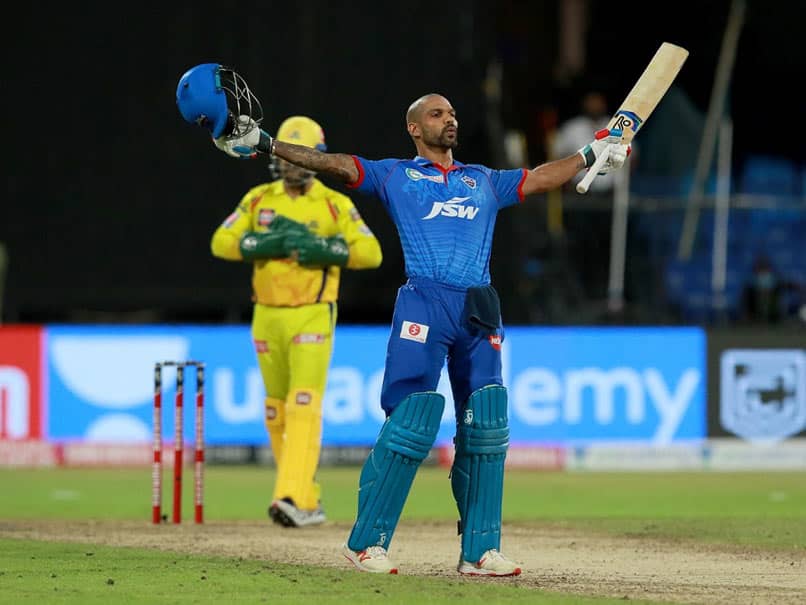 Shikhar Dhawan put on a batting masterclass as he scored his maiden Indian Premier League century to help Delhi Capitals beat Chennai Super Kings in Sharjah on Saturday. Chasing 180 for the win, Dhawan remained unbeaten on 101 and he was ably supported first by Shreyas Iyer and then by Marcus Stoinis. The match went to the wire with Delhi needing 17 runs off the last over. An injury to Dwayne Bravo forced MS Dhoni to bowl Ravindra Jadeja and Axar Patel smashed him for three sixes to seal the win for his side.

With the win, Delhi went to the top of the points table. They now have 14 points from nine games with seven wins under their belt.

CSK, who had the chance to sneak into the top-four on Saturday, stay at sixth spot on the points table.

Earlier, CSK, after winning the toss and opting to bat, got off to a terrible start as they lost Sam Curran on the third ball of the match.

Shane Watson and Faf du Plessis then steadied the ship for CSK and put on 87 runs for the second wicket. Watson was cleaned up by Anrich Nortje for 35. He hit six boundaries during his stay in the middle.

Ambati Rayudu then joined du Plessis in the middle and the duo started hitting the big shots in tandem.

Du Plessis scored a half-century but failed to carry on for a big innings. Rayudu continued on his onslaught and scored a quick-fire 45 off 25 balls.

Jadeja also contributed with a cameo of 33 off just 13 deliveries in an innings comprising of four sixes.

Nortje was the pick of the bowlers for Delhi as he picked up two wickets for 44 runs. His last over cost them 16 runs as Jadeja cleared the fence twice to push CSK to a competitive total of 179/4.

CSK next play Rajasthan Royals at the Sheikh Zayed Stadium in Abu Dhabi on Monday.

Delhi Capitals will travel to Dubai to face Kings XI Punjab on Tuesday.

Shikhar Dhawan IPL 2020 Cricket Delhi Capitals vs Chennai Super Kings, Match 34
Get the latest updates on IPL 2021, IPL Points Table , IPL Schedule 2021 , live score . Like us on Facebook or follow us on Twitter for more sports updates. You can also download the NDTV Cricket app for Android or iOS.