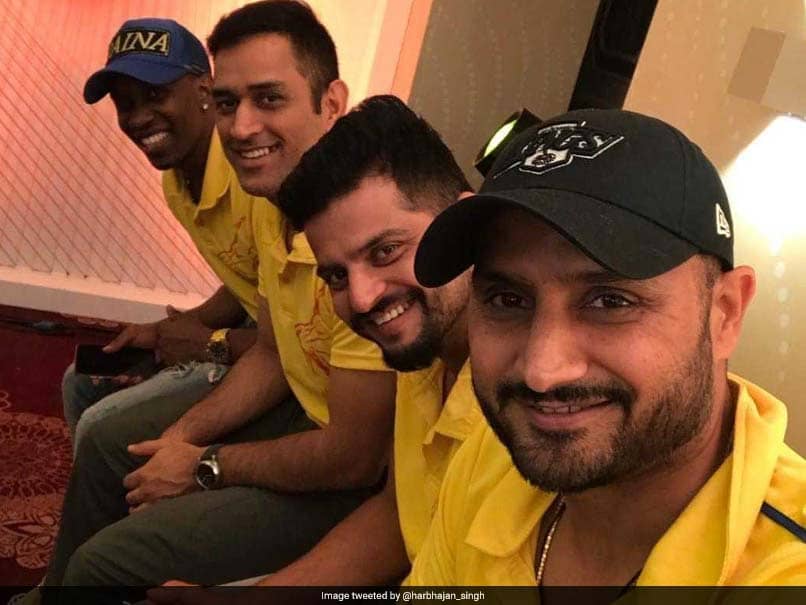 After the victory, captain MS Dhoni enjoyed team dinner with his team-mates.© Twitter

Chennai Super Kings also became the second team in the history of the IPL to lift the title thrice.

Both Ambati Rayudu and Harbhajan Singh now have four IPL titles to their name. Harbhajan and Rayudu won three titles with Mumbai Indians and now added fourth to their cabinet with CSK. Rayudu finished the IPL 2018 season as the fourth-highest run-getter.

Playing in yellow jersey, the right-hander scored 602 runs in 16 matches at an average of 43.00. He scored one century and three fifties in the recently-concluded tournament.

Harbhajan's performance in the IPL 2018 wasn't that impressive. The veteran spinner claimed 7 wickets in 13 matches at an economy of 8.48. After CSK lifted the title, Harbhajan took to Twitter and posted a photo with the coveted IPL trophy.

"3/4 months back before the auction I mentioned this And it happened #believe it and become whatever u want to #4th IPL trophy for me @ChennaiIPL #whitslepodu," Harbhajan's post read.

Comments
Topics mentioned in this article
Chennai Super Kings Sunrisers Hyderabad MS Dhoni Indian Premier League 2018 Dwayne Bravo Suresh Raina Harbhajan Singh Cricket
Get the latest updates on India vs Australia Series, check out the India vs Australia Schedule for 2020-21 and Ind vs Aus live score . Like us on Facebook or follow us on Twitter for more sports updates. You can also download the NDTV Cricket app for Android or iOS.