Mayank Agarwal and Manoj Tiwary combined brilliantly to pull off a spectacular tag-team catch that turned the KXIP vs RR match on it's head. 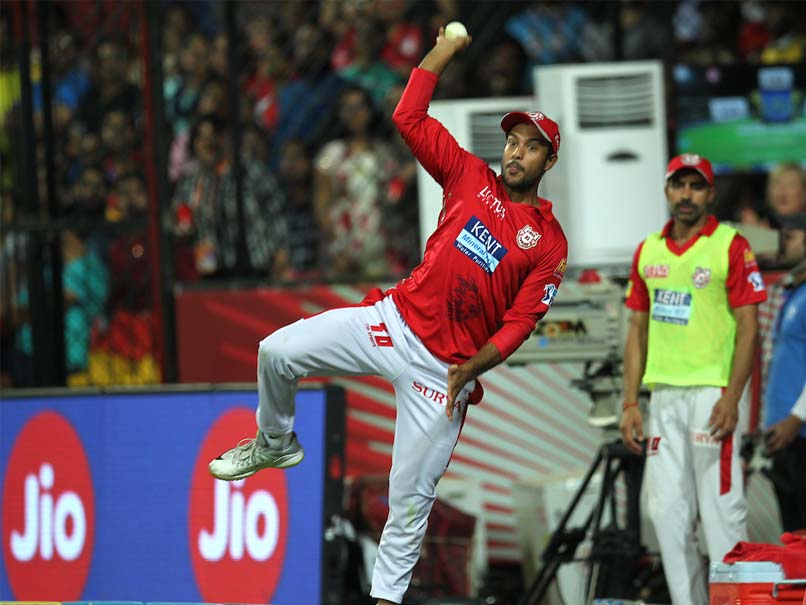 Mayank Agarwal showed great presence of mind to throw the ball to Tiwary just as he lost his balance.© BCCI

IPL 2018 has seen some exceptional moments in the field that have wowed fans from all over the world. Trent Boult's blinder at square leg to dismiss Virat Kohli grabbed eyeballs during the Delhi Daredevils vs Royal Challengers Bangalore match and on Sunday night Kings XI Punjab's Mayank Agarwal and Manoj Tiwary combined brilliantly to pull off a spectacular tag-team catch that will surely rival Boult's effort. Besides being an absolutely stunning effort, the catch was all the more important for Punjab because it brought to an end Ben Stokes' stay at the crease.

The inspirational moment in the field came during the Kings XI Punjab's encounter against Rajasthan Royals at the Holkar Cricket Stadium in Indore.

Stokes, who has been poor with the bat this season, was looking dangerous having hit two boundaries shortly after coming out to bat.

At the time, Rajasthan Royals were also threatening to be in a position to post a big total. Sanju Samson (28) had been dismissed with Jos Buttler (51) going strong.

Stokes' wicket led to a domino effect as Rajasthan lost their next four wickets for just 29 runs. In the end, Rajasthan stuttered to 159 from a strong position of 100 for three in 12.4 overs.

KL Rahul starred in the chase for Punjab, notching up his highest ever IPL score of 84. Rahul's unbeaten knock saw KXIP comfortably overhaul the target with eight balls to spare.

The win helped Punjab climbed to third in the table while Rajasthan's season went from bad to worse courtesy a sixth loss in nine matches.

Comments
Topics mentioned in this article
Kings XI Punjab Rajasthan Royals Mayank Agarwal Manoj Tiwary Indian Premier League 2018 Cricket
Get the latest updates on IND vs NZ 2021, check out the Schedule and Live Score . Like us on Facebook or follow us on Twitter for more sports updates. You can also download the NDTV Cricket app for Android or iOS.