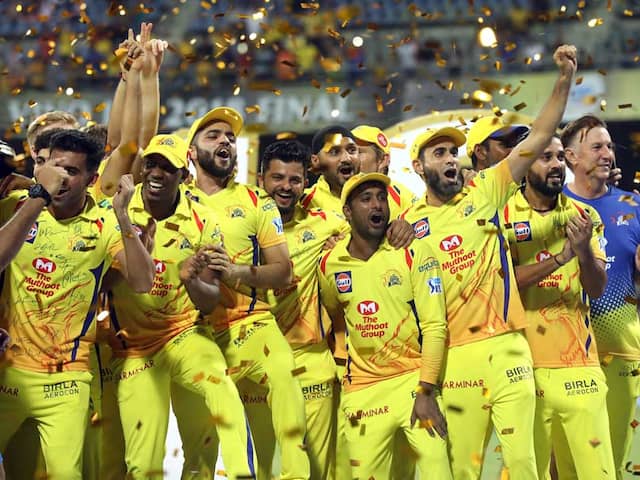 After the victory, Dhoni's men celebrated their title win in style.© BCCI

Mahendra Singh Dhoni-led Chennai Super Kings lifted their third Indian Premier League (IPL) title, thrashing Sunrisers Hyderabad by eight wickets in the summit clash at the jam-packed Wankhede stadium in Mumbai. Making a comeback after serving two years of a ban, Chennai Super Kings stood up to their reputation of being one of the best team in the cash-rich league. After the victory, Dhoni's men celebrated their title win in style.

CSK, who returned to IPL after two years, gave their fans a memorable gift by clinching the title on Sunday.

Wat a Come back C for come back C for champion C for wat C for C for #CSK Chennai Super Kings #IPLCHAMPIONS2K18 Kings are always Kings pic.twitter.com/4gpK0vlO9Q

Super Kings remain Superior Kings;
No matter where they play;
The more they are driven out of Chennai;
Chennai super Kings proved that they are the uppermost super Kings;
Let them play;
Let them not be politicized! https://t.co/20Q5155Fdx

Put in to bat, Yusuf Pathan's unbeaten 45 runs off 25 balls along with captain Kane Williamson's 47 helped Sunrisers Hyderabad post a competitive 178 for 6.

The competitive target seemed like a cake-walk for the MS Dhoni-led side.

The Yellow Brigade chased down a 179-run target with nine balls to spare.