The 34-year-old leaped in the air and grabbed the ball one-handed to complete one of the most spectacular catches in the history of cricket. 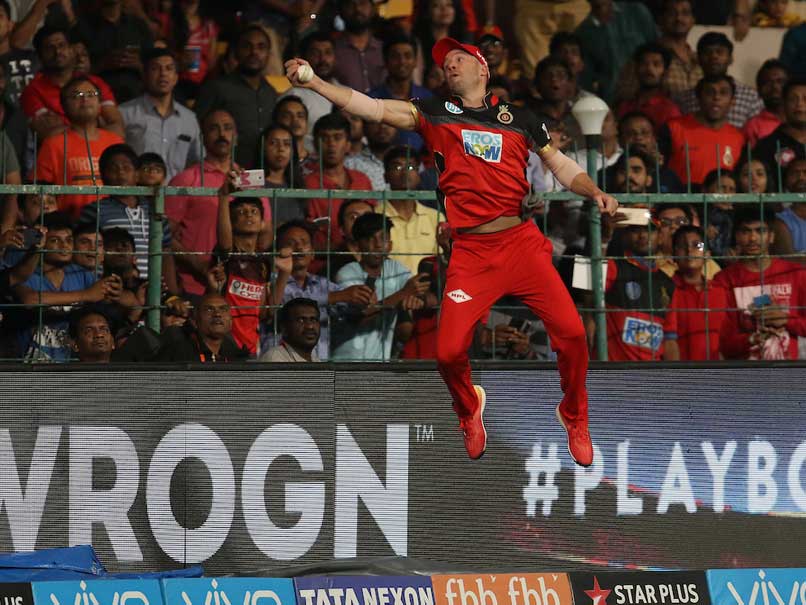 We've got an absolute gem from AB de Villiers.© BCCI

The Indian Premier League (IPL) fans at he M. Chinnaswamy Stadium in Bengaluru have now witnessed three mind-boggling one-handed catches this season. First, we had Trent Boult's unbelievable grab to remove Virat Kohli, followed by Rashid Khan's magnificent take to dismiss Colin de Grandhomme in the clash between Royal Challengers Bangalore and SunRisers Hyderabad on Thursday. Then, we've got an absolute gem from AB de Villiers. The former South Africa skipper boasts a collection of spectacular catches that few in the cricket world can rival, and the South African 'Superman' has added another to his CV.

Playing for Royal Challengers Bangalore against SunRisers Hyderabad, De Villiers was fielding on the rope at deep mid-wicket. Alex Hales seemed to have cleared the boundary until De Villiers appeared on the scene to pluck an unbelievable catch out of thin air. The 34-year-old leaped in the air and grabbed the ball one-handed to complete one of the most spectacular catches in the history of cricket. The fielder's right foot was extremely close to the rope, still, he managed to have enough balance in the end.

Watch it for yourself to believe it

Earlier, De Villiers and Moeen Ali smashed quickfire half-centuries to propel Royal Challengers Bangalore to an imposing 218 for six against table-toppers SunRisers Hyderabad in a must-win match. Sent into bat, De Villiers (69 off 39) and Ali (65 off 34) overcame a bad start to stitch 107 runs off just 57 balls for the third wicket to set the platform for RCB's total. Afghanistan's leg-spinner Rashid Khan once again shone brightly with the ball for SunRisers with figures of 3/27 from his four over.

Comments
Topics mentioned in this article
Royal Challengers Bangalore Sunrisers Hyderabad AB de Villiers Indian Premier League 2018 Cricket Royal Challengers Bangalore vs Sunrisers Hyderabad, Match 51
Get the latest updates on India vs Australia and check out  Schedule, Results and Live Score. Like us on Facebook or follow us on Twitter for more sports updates. You can also download the NDTV Cricket app for Android or iOS.