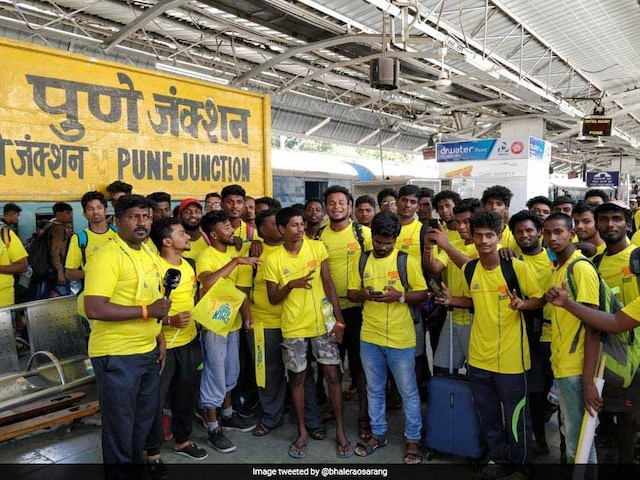 Chennai Super Kings (CSK) have one of the most loyal fan bases in the Indian Premier League (IPL). As a special gesture, the team management has organized for a chartered train, named the 'Whistle Podu Express' after the supporters' group, to transport hundreds of fans on the 21-hour journey to Pune. CSK's new recruit, South African leg-spinner Imran Tahir, heaped praise on the ardent followers as the videos surfaced on social media showing the supporters singing and dancing on the train as it made its way to the west coast of the country. A video has been posted on the official Twitter handle of Chennai Super Kings in which Tahir has expressed that the love of CSK fans is overwhelming and he is looking forward to meeting them in Pune.

CSK were forced to move their remaining home matches this season to the MCA Stadium in Pune after protests stemming from a water dispute in Chennai meant the safety of spectators at Chepauk Stadium, their traditional home ground, could not be assured.

The team management's efforts ensured that CSK players will still be greeted by a sea of yellow for their match against Rajasthan Royals on Friday night.

In addition to footing the bill for the train, Super Kings paid for tickets to the match and overnight accommodation for its loyalist supporters, who will return home on Saturday.

"Fans have been integral to our team and we have seen how much it matters to them," CSK CEO Kasi Viswanathan told the media.

"So when they approached us for help regarding travel, we thought why not go a step further and get all of them to Pune. We had little time because it happened inside three days.

"We sent our logistics team to Pune to take care of accommodation, food and other things. We have put them up in six hotels and two marriage halls."

The return to Pune will be a homecoming of sorts for captain MS Dhoni and coach Stephen Fleming, who joined forces at Rising Pune Supergiant during Chennai's two-year ban.

Comments
Topics mentioned in this article
Chennai Super Kings MS Dhoni Cricket Chennai Super Kings vs Rajasthan Royals, Match 17 Indian Premier League 2018
Get the latest updates on IPL 2020, check out the IPL Schedule for 2020 and Indian Premier League (IPL) Cricket live score . Like us on Facebook or follow us on Twitter for more sports updates. You can also download the NDTV Cricket app for Android or iOS.