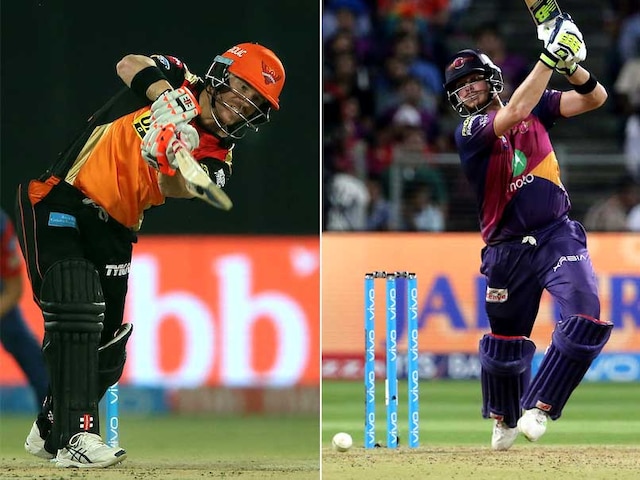 A brilliant bowling performance from Rising Pune Supergiant (RPS) saw them beat Sunrisers Hyderabad (SRH) by 12 runs at the Rajiv Gandhi International Cricket Stadium, Hyderabad on Saturday. Failing to capitalise on the flying start given by Shikhar Dhawan (19) and David Warner (40), SRH couldn't keep up with the required run-rate. Courtesy of disciplined Pune bowling, Hyderabad were not allowed to score runs at will. With wickets falling at regular intervals, Sunrisers Hyderabad lost their momentum. Yuvraj Singh scored the highest for Hyderabad, 47, while Jaydev Unadkat took his first IPL hat-trick in the last over of the game and finished with figures of five for 30. After this win, Pune are placed second on the table with 16 points.

Earlier, a good bowling performance by the Sunrisers Hyderabad restricted Rising Pune Supergiant to 148 for eight in 20 overs in the 44th match of the IPL on Saturday. After losing Rahul Tripathi early, Pune failed to get going and lost wickets at regular wickets. Disciplined bowling from SRH did not allow the Pune batsmen to open their arms and only let them score a single boundary in the powerplay. For Hyderabad, Siddharth Kaul finished with figures of four for 29 in his four overs while for Pune, Ben Stokes scored the highest, 39. Keeping in mind the form of some Sunrisers' batsmen, Pune will need to work doubly hard to win the match and carry on with their winning run. (SCORECARD)

When and Where to watch: Sunrisers Hyderabad(SRH) vs (RPS)Rising Pune Supergiant

(SRH) Vs (RPS) is scheduled for a 4 pm IST (10.30 am GMT) start. Live Streaming and TV information for the match can be found below.