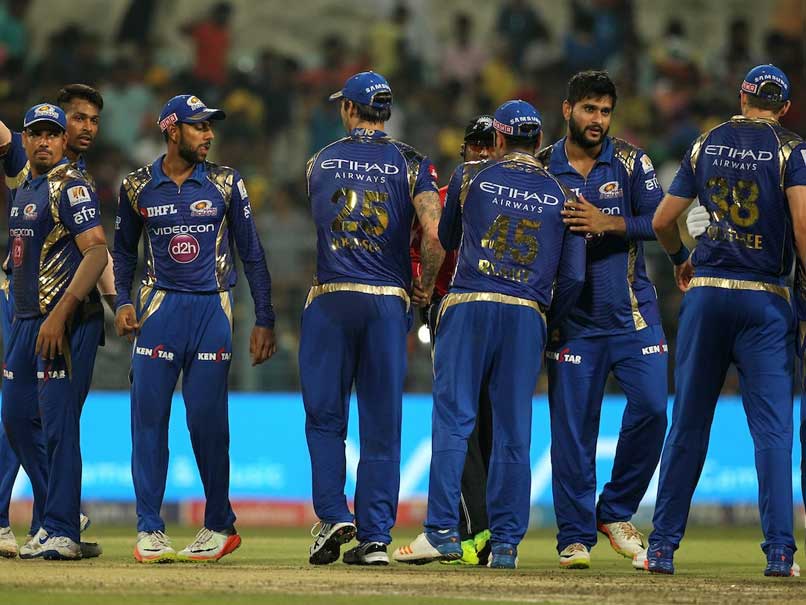 In one of the closest Indian Premier League (IPL) finals, Mumbai Indians scraped past Rising Pune Supergiant by one run to clinch the Season 10 title -- their third IPL triumph. It was a humdinger of a match as Mumbai looked to be out of the contest for most part of the contest but they came alive at the fag end to deny Pune a maiden title. Chasing 130 to win, Pune looked to be coasting towards the target but their slow run-rate came back to bite them in the end as they fell tantalisingly short. Captain Steve Smith scored a fighting half-century but it wasn't enough to get his team across the line. (Scorecard)

Catch all the highlights of the IPL final between RPS and MI here.

00:02 IST: Rohit Sharma: I'm calm now. It was a great game of cricket. I'm sure the spectators enjoyed it. To be able to defend a score like this was a brilliant effort, I couldn't ask for more. Whenever you're defending a total like that, the first thing you'e to do is believe. I told the boys if we could do it against KKR (105) there was no way we couldn't do it here. There was assistance from the pitch too so it was a matter of exploiting the conditions. When three overs were left, I had confidence in the bowlers. They've always done the job wherever they've played. It was about giving freedom to them because they're the masters and they've done it before. I just told them to do whatever they want and set the field accordingly.

00:00 IST: Tendulkar: Simply amazing. The first half wasn't great for us. We got together during the break and Mahela gave a nice speech. We believed that we could pull this off. The fielding was great under pressure. I have always believed in the saying, once a champion, always a champion. He (Malinga) has done well for us for a number of years. I was so sure that he was going to do something great tonight. He might not have had a great season, but he is one guy who can change it in one over.

23:58 IST: Bumrah: The ball was reversing, we needed a wicket at that time. Mahi bhai's wicket was the crucial wicket because he can be dangerous in these situations. After the first innings, we always wanted to fight because we were short on runs. Our bowling effort was brilliant. After every over we were backing each other that we can still make it.

23:55 IST: Absolute humdinger we have witnessed here. Mumbai looked well and truly out of the match but clawed their back thanks to some brilliant bowling. Third title for Mumbai as Pune are denied their maiden IPL triumph.

23:39 IST: WICKET!! Smith is gone! Gamechanger! He hit it brilliantly but found the only fielder on the off-side. Mumbai players are celebrating as if they have already won it. 7 needed off 3 balls.

23:37 IST: WICKET!! Tiwary holes at the long-on boundary. Mumbai still in it! Pune need 7 off 4 balls but Smith is on strike.

23:35 IST: Mitchell Johnson to bowl the last over. Tiwary on strike!

23:34 IST: Captain's knock from Smith. But he still needs to do a little more.

23:32 IST: Six!! Full length delivery from Bumrah and Smith smashes it over long-off for a maximum.

23:30 IST: Brilliant bowling from Bumrah! Just three singles of as many balls.

23:29 IST: Smith survives scare. That almost carried to Hardik. Just a single so Mumbai will be happy.

23:26 IST: Four!! Smith with a risky flick but it yields him the much-needed boundary.

23:25 IST: Brilliant bowling from Malinga! Four balls and given away just 2 runs.

23:11 IST: Four!! Short from Krunal and Dhoni just uses the paces and gets it away to the third man boundary. Much-needed boundary for Pune.

23:04 IST: Smith survives another scare. Things are getting harder for Pune.

23:00 IST: Wild swing from Smith. The pressure might be getting to him.

22:54 IST: Few good overs from Mumbai and Pune will be feeling the heat.

22:46 IST: Four!! Short, wide and Smith smashes it to the square boundary. Pune are coasting now!

22:27 IST: Field nicely spread out and RPS are easily getting their singles. That's what they need for now!

#Rahane with another glamorous shot! He keeps his ground and the ball runs off to deep extra cover!#RangWahiJungNayi #RPSvMI #IPLFinal pic.twitter.com/WIuLSCN83r

22:19 IST: A risky single and Smith would have been a goner if that was direct hit. Pune need to be careful!

22:16 IST: Wide from Karn Sharma! Mumbai can't afford to give away freebies.

21:58 IST: Four!! Short and wide from Krunal and Rahane eases it through the covers for RPS' first boundary. RPS are 6/0 after 1 over.

21:55 IST: So, Pune openers are all set and Krunal Pandya to start the proceedings for Mumbai.

21:42 IST: That brings an end to the Mumbai innings. It was a struggle for most part of it but Krunal Pandya's rescuing act has at least given them a fighting chance.

21:40 IST: WICKET!! Krunal falls on the last ball but he has given Mumbai a score to defend.

21:38 IST: Six!! Full and Krunal smashes it straight down the ground. MI have a score to defend now at least! What an innings this has been from Krunal Pandya.

21:34 IST: Six!! Krunal smashes Unadkat over mid-wicket. He is fighting a lone battle and his contribution could very well be the difference. MI are 115/7 after 19 overs.

21:27 IST: Six!! Short from Christian and Mitchell Johnson swats it over long-on for a maximum. Much-needed boundary for Mumbai. 100 up for Mumbai. Phew!! That took some time!

21:24 IST: Krunal just can't get anything away. What a lacklustre performance from Mumbai's batsmen today! MI are 92/7 in 17 overs.

21:18 IST: Boundaries have completely dried up for Mumbai. They are dealing in just singles!

21:06 IST: Slip in place for Karn Sharma. Smith going for the kill here.

20:55 IST: Out!! Another one is gone and it's another big one! Pollard tries another maximum but finds the long-off fielder. MI are 65/5 after 11 overs.

20:53 IST: Six!! First maximum of the final and comes off the bat of Kieron Pollard. What a way to get of the mark!

20:48 IST: Four!! Krunal comes down the track and lifts Sundar towards the cover bounadary.

20:36 IST: Just when the partnership was bringing Mumbai back on track, they lose another one.

20:34 IST: WICKET!! Direct hit from Steve Smith and Rayudu is run out. Great stuff from the Australian and Rayudu has to take the long walk back!  MI are 41/3 in 7.2 overs.

20:31 IST: Four!! Short and wide, and Rayudu helps himself to his first boundary. Five boundaries for Mumbai in quick time!

20:29 IST: Four!! Beautiful cover drive from Rohit. Fourth boundary of the over. Just what the doctor ordered for Mumbai. MI are 32/2 after 6 overs.

20:27 IST: Four!! Lockie Ferguson drifts on to Rohit's pads and another boundary for MI.

20:25 IST: Four!! First boundary for Mumbai in the final and it comes from the bat of their skipper Rohit.

20:16 IST: Early problems for Mumbai. They have lost both their openers and a lot will depend on Rohit. Not what MI would have wanted after opting to bat!

20:13 IST: WICKET!! Another one! Simmons c and b Unadkat. Brilliant start for RPS!! What a catch from the left-arm pacer. Pressure on MI now!

20:08 IST: Parthiv cuts and gets it through the in-field but only a double.

20:06 IST: Washington Sundar has the ball in hand and starts with a dot ball.

20:00 IST: Lendl Simmons and Parthiv Patel walk out to bat for Mumbai while Jaydev Undakat will start off the proceedings for Pune.

19:52 IST: Just minutes away from the start and the excitement is building up.

19:33 IST: Steve Smith: We would have batted first as well. Looks like it would slow up a bit in the second innings. Runs on the board on the big final always helps. We have played some good cricket. Both teams deserve to be in the final. Same team as the last game.

Rohit Sharma: We are going to bat first. Looks a good pitch. Having played the last game here, it slows down a touch in the second innings. So, it is a big game, put runs on the board and you know take the pressure off. Tonight is another opportunity to be a part of a big game. Hopefully, we can create history. We have the same team from the last game.

19:30 IST: MI captain Rohit Sharma has won the toss and elected to bat vs RPS.

19:25 IST: Just minutes away from the all-important toss!!

19:15 IST: This is the fourth time Mumbai have reached this stage of the tournament but a greater stat is that a certain MS Dhoni is in his seventh IPL final. What an incredible feat for the former India captain!!

19:05 IST: The wishes from cricket fans for their favourite teams are coming thick and fast. Here are some of them:

19:02 IST: There is already some good news for people related to Mumbai Indians as fielding coach Jonty Rhodes has welcomed baby boy -- Nathan John -- into the world. And the South African took to Twitter to break the news.

The prize before the prize @mipaltan? Nathan John "plunged" into the world at 6:20pm on IPL final #poolbirth #earthmother #incredibleindia pic.twitter.com/UiUCMt4fih

18:58 IST: Pune won their three previous matches against Mumbai this season but that will have little affect on the final result today. It's the final and past performances rarely matter. It's which team performs better on the day that will take home the big prize.

18:55 IST: Hello and welcome to the live blog of the IPL 2017 final between Mumbai Indians and Rising Pune Supergiant.

Two-time champions Mumbai will be playing their fourth final and should have been termed as clear favourites had it not been for a certain Mahendra Singh Dhoni, who will be playing a record seventh IPL final. Some of the MI stars, like skipper Rohit Sharma, Kieron Pollard, Harbhajan Singh and Ambati Rayudu, have a fair idea of how to win a mega final as they have been a part of the victorious 2013 and 2015 sides while Pune skipper Steve Smith will be banking on Dhoni's experience with an aim to emulate Shane Warne, Adam Gilchrist, David Warner -- the Aussies who have lifted the silverware.