Rohit Sharma or Mahendra Singh Dhoni could reach a landmark win in the IPL 10 final. 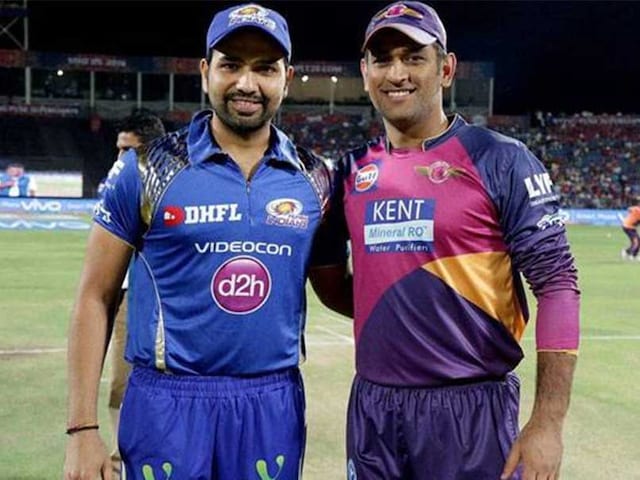 Rohit Sharma and MS Dhoni will be locked in another interesting battle in IPL final.© BCCI

Mumbai Indians (MI) eased to a six-wicket win against Kolkata Knight Riders on Friday to book their place in the Indian Premier League (IPL) final. Sent into bat, KKR were bowled out for 107 runs in 18.5 balls, and Mumbai chased down the target with 33 balls to spare at the M. Chinnaswamy Stadium in Bengaluru. Two-time winners MI will lock horns with Rising Pune Supergiant (RPS) in the title clash in Hyderabad on Sunday. Steve Smith's Pune has beaten Rohit Sharma's side on all three occasions this term. Hence the battle between the two astute captains is bound to grab all the headlines ahead of the big final.

However, Sharma is locked in another intriguing battle with former India and Pune captain Mahendra Singh Dhoni. Having played all ten editions of the tournament, the duo has set and broken several records.

Interestingly, Dhoni and Sharma have been part of six T20 final wins in their career. In fact, Suresh Raina and Ravichandran Ashwin too have played in six T20 winning finals.

But on Sunday, either one of Dhoni or Sharma will move ahead in the race with seven T20 final wins to his name.

One of Dhoni and Rohit set to move ahead.

Dhoni has won the IPL and Champions League T20 each on two occasions. At the international level, Mahi has captured the World T20 and Asia Cup. Rohit has won the IPL on three occasions and the CLT20 once. Rohit was also part of India's WT20 triumph in 2007.

While Dhoni seems to have hit form at the right time, Sharma will be desperate to deliver for his team in the final. The stylish right-hander on Friday became the first Mumbai Indians batsman to go past the 3000-run mark.

'Hitman' also became only the second player, after Raina, in the IPL's history to score 300 runs in every edition of the tournament.

Will Sharma's silken touch seal it for Mumbai or can Dhoni's brute force power Pune over the line? The IPL 2017 final promises to be a fight to the finish.

Comments
Topics mentioned in this article
Rising Pune Supergiant Mumbai Indians MS Dhoni Rohit Sharma Cricket IPL 2017
Get the latest Cricket news, check out the India cricket schedule, Cricket live score . Like us on Facebook or follow us on Twitter for more sports updates. You can also download the NDTV Cricket app for Android or iOS.