Martin Guptill was in the thick of things in Kings XI Punjab's win over Mumbai Indians on Thursday night. 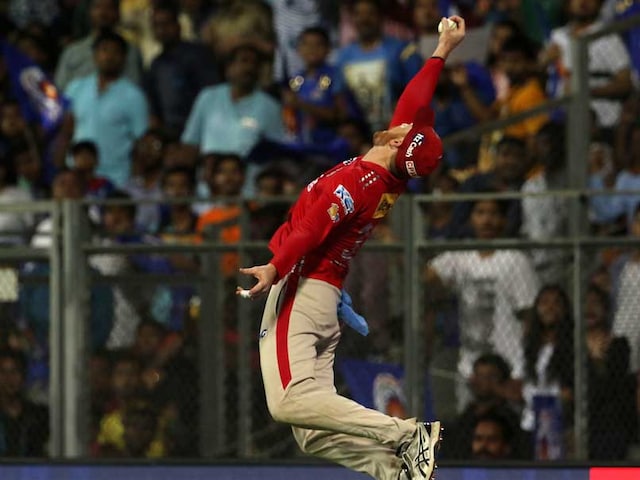 New Zealand batsman Martin Guptill has been a late bloomer in the Kings XI Punjab (KXIP) line-up for the Indian Premier League (IPL) Season 10, but he was more than handy in their hard-fought win over table-toppers Mumbai Indians (MI) on Thursday night at the Wankhdede Stadium in Mumbai. Apart from being involved in a 68-run opening partnership with Wriddhiman Saha off just 5.3 overs, the Kiwi was in fine fettle, claiming three catches including a one-handed stunner that sent Lendl Simmons back to the pavillion to give his side a vital breakthrough.

Guptill, who scored 36, was fielding at long-on when Simmons clobbered a full toss from Punjab skipper Glenn Maxwell in that direction. The Kiwi timed his jump to perfection to pull off a one-handed wonder.

Simmons could barely believe what he saw, and the fans too were left stunned at what they had just witnessed.

What a beautiful catch... Amazingly done by #Guptill

KXIP's win gave them two vital points and kept them in the running for a play-off spot, though they have to win their last match as well against Rising Pune Supergiant to make the cut.

Comments
Topics mentioned in this article
Kings XI Punjab Mumbai Indians Martin Guptill Lendl Simmons IPL 2017 Cricket
Get the latest Cricket news, check out the India cricket schedule, Cricket live score . Like us on Facebook or follow us on Twitter for more sports updates. You can also download the NDTV Cricket app for Android or iOS.