Despite controversies being a constant companion of T20 cricket, the sponsors continue to remain unabashed fans of brand IPL. While the older ones have come in with renewed vigour and newer strategies to attract eyeballs during the 45-day tournament, the new entrants in the fray are a bunch of e-commerce brands. 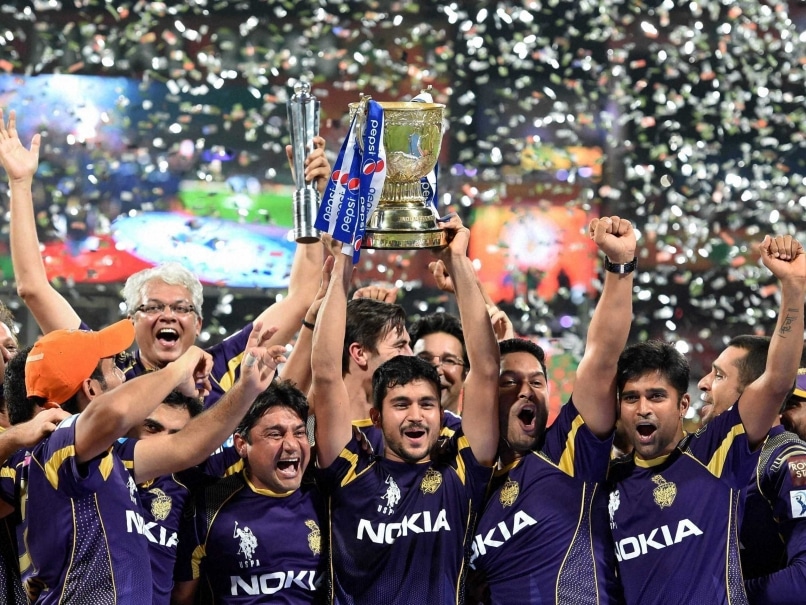 KKR with IPL trophy in 2014. (Picture is for representational use only)© BCCI

If you thought that the upcoming Indian Premier League will be subjected to cricket fatigue after a month and a half long World Cup, then you will be pleasantly surprised to hear that the sponsors are fighting for advertising space. That is because, riding high on Team India's performance in the recently concluded quadrennial event, this edition of the IPL is predicted to garner about 24 Crore eyeballs, a 30 per ent increase over the previous edition.

So a win-win-situation for the organisers and the moneyballs. Because this property is completely recession-free.

Prime Time TV over the next month and a half will attract some hard core cricket fans and millions of cricket-entertainment fanatics, as well. That's what the broadcasters are banking on in the eighth season of the Indian Premier League.

Despite some of the off-field lows that IPL has seen, this year the tournament has already earned 14 on-air or Associate sponsors, most of whom have fought tooth and nail for IPL space.

The presenting sponsorship is Rs 60 Crore while the Associate sponsorship for a year is between Rs. 28 to 35 Crore.

The broadcasters are hoping to rake in around Rs 900 to 950 Crore, which is a marked increase from the Rs.800 Crore they earned last year.

Senior Vice-President and the Head of Madison Media tells NDTV, "The fight for ad-space this season has been unprecedented. We had the opportunity to sell some spots at premium rates, some well over Rs 4.75 Lakh/10 seconds. There are many more companies vying for a space during the IPL season because one gets a steady stream of TV audiences through these 45 nights."

To add to the existing bouquet of on-air sponsors, some e-commerce brands have thrown their weight behind the Indian Premier League this season. Cardekho, Amazon and Snapdeal feel that great Indian Cricket festival is the best way of leveraging their brands.

Laxmikant Gupta, the Chief Marketing Officer of CARDEKHO says, "We at Cardekho are going mass with our brand communication and a lot of performance based marketing. Which is why we were looking for properties on Television that can get us a large volume of buyers and sellers of cars. So, IPL, as you know, provides us the right opportunity to reach out to a large number of people all over India in a very concentrated manner and also in a very wide manner."

Title sponsors PEPSI, who signed a five year deal worth Rs 397 Crore in 2012 are riding high on the response the eighth season of IPL saw from the viewers. They have come up with new and unique ways of bringing together consumer, content and cricket.

"We have come up with a unique concept called Crash the Pepsi IPL. It is about saying that every year we come back to you with the Pepsi ad for the summer but this year we are getting the consumers to come and tell us about their love for Pepsi. If you tell us about your love of Pepsi in a 30 second commercial, we put it on air during IPL. So, every weekend starting from this weekend, right up to the following weekend we are going to showcase a different consumer winning ad and I am amazed by the response. In just about 2 weeks we have got close to 400 films. We have put a 100 of them in the gallery where we are showcasing these films. We are in the process of shortlisting the best. Our jury which includes, Ranbir Kapoor, Pritam, Anuja Chauhan and Gautam Menon. The winner gets to sit in the Pepsi VIP box and watch the match, have a VIP experience and hopefully just get famous for putting out content. You know that content today is really the currency for millennials. It is all about content and we can inspire young content creators to comeback and give us their point of view of our brand. I think it is going to be a fabulous experience not just for the viewers but equally for us in terms of learning of what they feel about our brands. We were actually a part of youtube fan fest where we had content creators who actually engage from pretty much across the world actually. It is simulcast across the world on the web and actually watched across the world over. The gallery had 200,000 views in the first 24 hours. It will probably give us a bit of a kicker on getting the next round. Over the next 6 weeks it should be really interesting good space to watch," says Ruchira Jaitley, Marketing Director, PEPSICO INDIA.

Team India's performances in the World Cup have enhanced sponsor interest because they well and truly believe that the cricket fans will be hooked on to the T20 extravaganza over the next 42 days.

Comments
Topics mentioned in this article
IPL 8 Cricket
Get the latest updates on ICC T20 Worldcup 2022 and CWG 2022 check out the Schedule, Live Score and Medals Tally. Like us on Facebook or follow us on Twitter for more sports updates. You can also download the NDTV Cricket app for Android or iOS.