Virat Kohli "Caught In The Moment" By Anushka Sharma

Virat Kohli posted a candid picture of him sitting next to a water body. 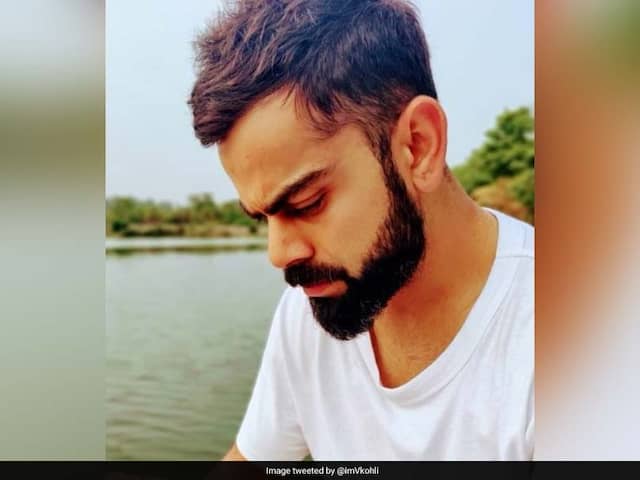 Virat Kohli didn't get an opportunity to add to his Twenty20 International (T20I) run tally with rain playing spoilsport in the first T20I against South Africa in Dharamsala on Sunday night. The match had to be called off without a single ball being bowled at the Himachal Pradesh Cricket Association (HPCA)Stadium. On Monday, the Indian skipper posted a candid picture of him sitting next to a water body. Kohli captioned it: "Caught in the moment" and gave the picture credit to wife Anushka Sharma.

While it unclear where and when the picture is from, some fans were quick to point out the small heart and the initial 'A' on the Indian skipper's t-shit, which they felt stood for Anushka.

That A in your T-shirt

Look at the T-shirt. #virushka

I'm damn sure that A on you t shirt doesn't stands for Ace of heart ! Instead it's @AnushkaSharma !

His shirt A
love goals

India's home season kicked off on a disappointing note with rain as persistent rain battered Dharamsala on Sunday.

The heavy rain in Dharamsala left the crowd disappointed who had come in large numbers to witness their favourite stars in action.

While there was prediction of light showers in the afternoon, the weather forecast was all clear for the evening, but heavens opened up multiple times, putting paid to hopes of even having a five-over per side encounter.

Rain gods came calling in the afternoon but by 5:30pm it seemed that the rain had subsided with the spectators thronging the stadium.

Just when the ground staff at the HPCA Stadium were working in full force, a second spell of rain spoilt the evening as it was clear that even the shortest possible game cannot be conducted in such circumstances with multiple puddles created at the outfield.

The second Twenty 20 International (T20I) will be played on Wednesday and the weather forecast is clear for the game in Mohali.

Virat Kohli India vs South Africa, 2019 Cricket
Get the latest updates on IPL 2020, check out the IPL Schedule for 2020 and Indian Premier League (IPL) Cricket live score . Like us on Facebook or follow us on Twitter for more sports updates. You can also download the NDTV Cricket app for Android or iOS.