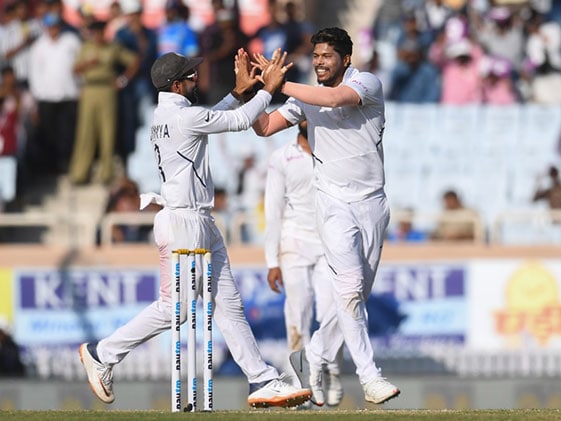 Umesh Yadav and Mohammed Shami bowled in tandem and helped India bundle out South Africa for 162 and 133 in reply to their first innings total of 497/9 and win the third Test by an inning and 202 runs on Tuesday. India won the three-match Test series 3-0 to register a record 11th consecutive Test series win at home. Fast bowler Umesh Yadav, who took 11 wickets in two Tests, called India's victory "Diwali Dhamaka" ahead of the festival, which will be celebrated on Sunday. Umesh Yadav and Mohammed Shami were speaking in an informal chat with wicketkeeper Wriddhiman Saha.

"Diwali is around the corner. Did you light firecrackers before coming here to play?" Wriddhiman Saha asked Umesh Yadav in a video tweeted by the BCCI.

Shami, on the other hand, claimed 13 wickets in three Tests against South Africa, including a five-wicket haul in the first Test in Vizag.

"We used to struggle while batting in overseas conditions. Last three bowlers couldn't bat much. The culture that is building up, like how Umesh Yadav batted at the tail end, it entertains the spectators," Shami told Saha.

"In last two years, we have seen how pacers can also make batsmen dance to their tunes on spinner-friendly pitches in India," he added.

Apart from impressive bowling, the duo grabbed everyone's attention with some hard-hitting to take India close to 500 in Ranchi.

While Umesh Yadav smashed five sixes in his 10-ball 31, Shami was unbeaten on 10, with a single maximum before India declared their innings on Day 2.

Wriddhiman Saha
Get the latest updates on IPL Auction 2023 and check out  IPL 2023 and Live Cricket Score. Like us on Facebook or follow us on Twitter for more sports updates. You can also download the NDTV Cricket app for Android or iOS.