Mayank Agarwal cracked his second century of the ongoing series against South Africa as India ended Day 1 on 273/3. 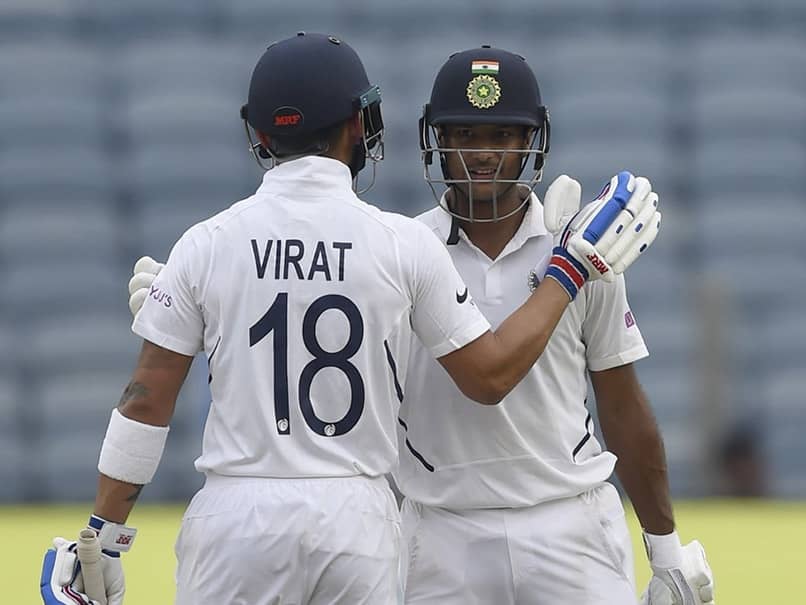 Mayank Agarwal brought up his second century of the series.© AFP

Mayank Agarwal brought up his second century of the series as India dominated the opening day of the second Test against South Africa in Pune on Thursday, ending at 273 for 3, with Virat Kohli not out on 63 and Ajinkya Rahane batting on 18. Agarwal, who scored a double-century in India's 203-run win in the opening Test, completed another hundred with a boundary off Vernon Philander to cement his place in the Test top order. Virat Kohli won the toss and opted to bat but Rohit Sharma, the twin-centurion in the previous Test, could not replicate the batting masterclass displayed in Vizag. Kagiso Rabada's fierce pace and consistency were rewarded as Rohit Sharma was dismissed on 14 in the 10th over. From there on, Agarwal led India's charge despite being hit on the helmet by a bouncer from Anrich Nortje.

Agarwal and Cheteshwar Pujara, who made 58 to bring up his 22nd Test fifty, stitched together a 138-run stand for the second wicket to steady the hosts' innings after Rohit's departure.

Pujara, who was dropped by Temba Bavuma at forward short leg for zero, was finally dismissed when Rabada had him caught by Faf du Plessis in the slip cordon just before tea.

Agarwal and Kohli could add just 35 more runs before the in-form opener became Rabada's third victim of the day. Agarwal, batting on 108, edged the ball to South Africa skipper at first slip.

The hosts were 198 for three in 61 overs with Kohli on eight, joined by vice-captain Rahane in the final session.

Captain Kohli, who brought up his 23rd Test fifty, and vice-captain Ajinkya Rahane then added another 75 runs to the total before the play was called-off due to bad light with 4.5 overs to spare in the day.