Mayank Agarwal and Rohit Sharma were involved in a 317-run stand, the third-highest opening partnership for India in Tests, that set the tone for hosts' dominance. 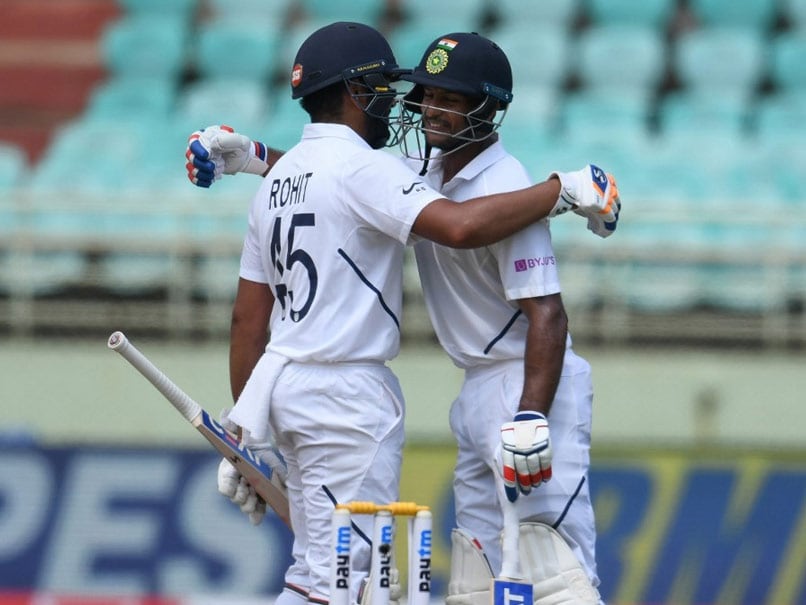 Mayank Agarwal and Rohit Sharma were involved in a 317-run opening stand.© AFP

Mayank Agarwal completed a double-century as India posted a mammoth total of 502/7 declared in the first Test against South Africa in Vizag on Thursday. Resuming day 2 on 84*, Agarwal went on to become the 4th Indian to convert his maiden Test century to a double hundred. Before the 28-year-old, Dilip Sardesai, Vinod Kambli, and Karun Nair had achieved this feat. Interestingly, Agarwal's 215 is also the first double century for an Indian Test opener since Virender Sehwag's 293 against Sri Lanka in 2009. Extremely proud of his achievement, Mayank Agarwal said that it was a feeling he could not describe in words.

"I am extremely happy. It is a feeling I can't describe. Glad that I could make my maiden hundred into a double. I am happy with the way I played, I am batting well and if we can keep batting together like this upfront, it will be great for the team. If Rohit and me can keep contributing to make 450-500 every time, it will be very tough for the opposition. I would be lying to say that you only have to think about your own game," Mayank Agarwal said.

"At times you feel that you are playing well and I can take a chance, but that's not how it works. You have to be patient. We had a great partnership to lay the foundation and get to 300 runs," he added.

Mayank Agarwal and Rohit Sharma were involved in a 317-run stand, the third-highest opening partnership for India in Tests, that set the tone for hosts' dominance.

Before the start of the match, Rohit Sharma's role as a Test opener was widely questioned by his critics. However, Rohit scored 176 runs in his first innings as a Test opener to prove his naysayers wrong.

"The way he (Rohit) dominated the spinners was great to see. Initially the pitch did do a bit with the new ball but when the sun came down it got better and better. As we approached lunch on day two, the ball started keeping low. It started spinning by tea and it is great signs for us," Agarwal said lauding Rohit Sharma.

As far as the match is concerned, India are in complete control as South Africa reached 39 for three, trailing by 463 runs, at the close of play on day 2.

Rohit Sharma Mayank Agarwal India vs South Africa, 2019 Cricket India vs South Africa, 1st Test
Get the latest updates on IPL 2021, check out the IPL 2021 Schedule and Indian Premier League Live Score . Like us on Facebook or follow us on Twitter for more sports updates. You can also download the NDTV Cricket app for Android or iOS.