Watch: Deepak Chahar Has The Last Laugh In Battle Of Stares With Martin Guptill

1st T20I: After New Zealand opener Martin Guptill hit him for a six and gave him a cold stare, India's Deepak Chahar exacted revenge in the very next delivery. 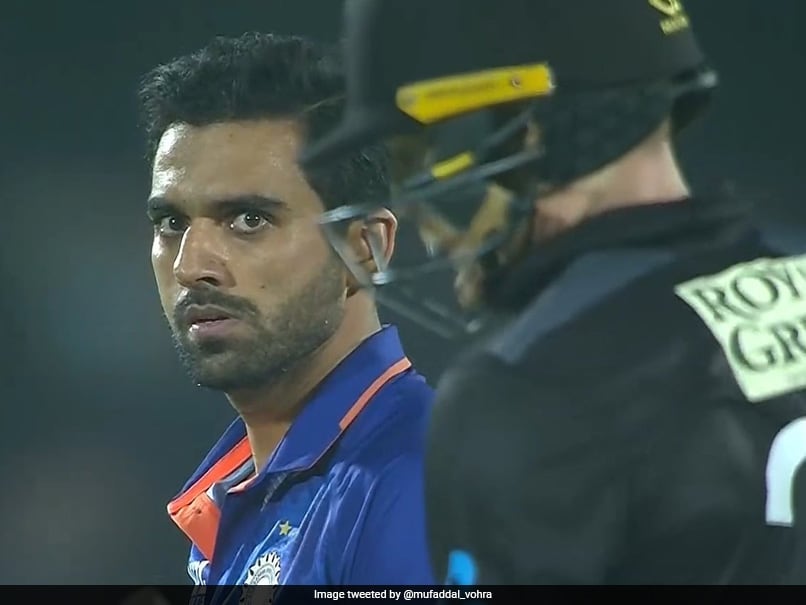 Deepak Chahar dismissed Martin Guptill in the 18th over of the 1st T20I vs New Zealand.© Twitter

India won the first game of the three-match T20I series against New Zealand on Wednesday at Sawai Mansingh Stadium in Jaipur. New Zealand have troubled India in the recent past at the ICC events and were also runners-up in the recently concluded T20 World Cup where India were knocked out after the conclusion of the Super 12 round. Meanwhile, during the first T20I between the two teams on Wednesday, India paceman Deepak Chahar and New Zealand opener Martin Guptill were involved in a series of events that gained viewers' attention.

Guptill smashed Chahar for a no-look six that covered a distance of 98 meters in the first ball of the 18th over. Guptill used the long handle of the bat and flayed the ball for a gigantic six into the stands. The opener didn't even look at the ball and stared at Chahar after hitting the big one.

However, Chahar exacted revenge and dismissed the swashbuckling opener in the very next ball. The dismissal ball was almost similar to the previous one and Guptill tried to play that as well into the night sky but fell short and gave away a catch to Shreyas Iyer near the boundary line.

The Chennai Super Kings pacer gave Guptill a cold stare when he was walking off the ground following the dismissal.

Apart from this battle, Guptill had scored 70 runs in 42 balls in the first T20I while Mark Chapman also played an impressive knock of 63 runs that guided the Blackcaps to set the total of 164/6 against the Rohit Sharma-led Indian side.

India chased down the target in the last over where they needed 10 runs to win. Suryakumar Yadav top-scored for India with his 62-run knock and he was well supported by skipper Rohit Sharma who smashed 48 runs while opening the batting.

Team India lead the three-match T20I series 1-0 and the next match will be played at the JSCA International Cricket Stadium in Ranchi on Friday.

Martin Guptill Deepak Chahar India vs New Zealand 2021 Cricket
Get the latest updates on IPL Auction 2023 and check out  IPL 2023 and Live Cricket Score. Like us on Facebook or follow us on Twitter for more sports updates. You can also download the NDTV Cricket app for Android or iOS.