India vs England: Virat Kohli seemed to be in a jovial mood following India's triumph in the third Test against England. 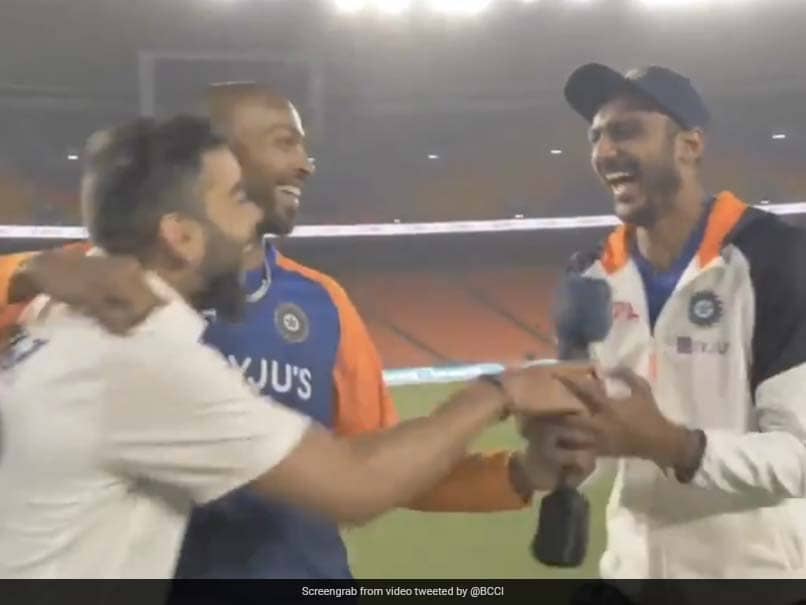 IND vs ENG: Virat Kohli made a remark in Gujarati, which left Hardik Pandya and Axar Patel in splits.© Twitter

Team India captain Virat Kohli seems quite intense on the field during matches. However, he gave fans a glimpse of the lighter side to his personality following India's triumph against England in the third Test. Hardik Pandya was interviewing Axar Patel -- who starred in the match with 11 wickets to his name -- when Kohli made a "special appearance". As Hardik tried to introduce his captain, Kohli made a remark in Gujarati, which left both Hardik and Axar Patel in splits.

DO NOT MISS: @hardikpandya7 interviews man of the moment @akshar2026. - By @RajalArora

India defeated England by 10 wickets in the third Test, which was held at the Narendra Modi Stadium in Ahmedabad.

England captain Joe Root won the toss and opted to bat in the pink-ball Test. The visitors were bowled out for 112 in the first innings, with opener Zak Crawley (53) the highest run-scorer. Axar Patel was the pick of the bowlers, picking six wickets with Ravichandran Ashwin accounting for three dismissals.

England made a strong comeback, dismissing India for 145 in their first innings. Rohit Sharma (66) was the leading run-getter. Root was the pick of the bowlers for England, accounting for five wickets.

However, England failed to improve on their show with the bat in the second innings as they were bowled out for 81. Axar Patel registered his second five-wicket haul of the match, while Ravichandran Ashwin claimed four scalps, and became the fastest Indian bowler to get 400 Test wickets.

India chased down the target of 49 runs without much ado, taking a 2-1 lead in the four-match Test series.

The hosts need to avoid a defeat in the final Test -- also scheduled to be held at the Narendra Modi Stadium -- in order to reach the final of the maiden edition of the World Test Championship (WTC). New Zealand have already qualified for the final.