India vs England: Rajkot Blueprint on How England Should Play, Says Alastair Cook

England are scheduled to play the fourth Test against India from Thursday. 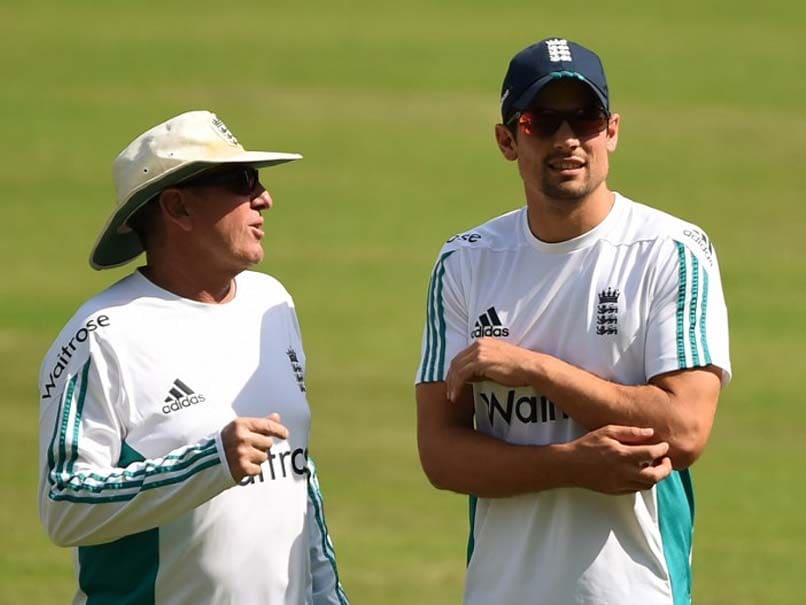 England are scheduled to play the fourth Test from Thursday© AFP

England captain Alastair Cook feels his team needs to go back to the first match at Rajkot, where they played positive cricket to eke out a draw before losing the plot in the following two games.

Having lost the second and third Tests at Visakhapatnam and Mohali respectively, England need to win the fourth match to keep their chances alive in the series. And team's head coach Trevor Baylisshas been quoted by the English media that the players required to play with positive intent, a fact Cook insisted upon during his pre-match press conference here.

"It's a clear message I knew was coming out (from Bayliss). We sat down at the end of the Mohali game and discussed how we wanted to play. We chatted at the end of that game and it's a very fair thing as part of the leadership group alongside Trevor and a couple of coaches," said the England skipper on the eve of the fourth Test here.

"Rajkot was our blueprint, we played really well there and we might have just slipped off a little bit in terms of that intent. Hopefully we can go back to that. It was just not Trevor saying," Cook added.

Cook wanted the team to forget about the slow batting indulged by himself and teenage opener Haseeb Hameed in the second innings of the second Test at Visakhapatnam.

"We do have to take that second innings in Vizag out of it where we played that way. But I wonder whether that did kind of tie into the third game and there was a bit of hangover and we did go back into our shells a bit.

After chatting around a bit I think it was quite clear message that we wanted to play a little bit more aggressively and a bit more intent. Trevor likes that," he said.

Cook revealed that newcomer Keaton Jennings, who has replaced injured Hameed, would be making his debut on Thursday.

"He's going to play. He's going to open the batting and another great opportunity for a guy to come in and play. He's in good touch, spending bit of time in the middle with the lions, getting hundreds and stuff," said Cook.

"It's pretty similar to what happened with me 10 years ago (When Cook debuted in Nagpur). I have never met him properly. He seems already a guy who's got a great head on his shoulders, mentally he's a very strong player. I wish him all the best.

"Obviously it's disappointing about Has, we obviously found a player there. But if Keaton comes in and does well,. it's just adding to our top-order players," he added.

Although Stuart Broad bowled yesterday in practice, Cook said he was still not 100 per cent certain to play. "Broad is probably 50-50."

Cook sounded pleased to have returned to a venue where England had tasted success in the past -- in 2006 and 2012.

"It's quite nice coming to a ground where we have good memories. Clearly doesn't count for much now. Mumbai has historically been a good ground for us. So hopefully we can play well," said Cook.

Cook said he wasn't been surprised by the performances of India's pace duo -- Mohammed Shami and Umesh Yadav.

"Certainly I am not surprised, we've faced them before. Certainly with their pace, their control has improved since the last time I have faced them. Kind of happens as people get better and better.

"Zaheer Khan was one of the best bowlers I have ever faced with the swinging ball in England in 2007.

He bowled beautifully and the skills he had with the swinging ball. For me to compare them is quite hard but they are certainly quicker than Zaheer," explained Cook.

Asked about Bhuvneshwar Kumar, who is likely to step in if Shami is not found fit because of a dodgy knee, Cook said the UP bowler was skillful although not as pacy as Yadav.

"Majority of the time I have faced him is in white ball cricket. He hits the length extremely well. He will be a different bowler to Yadav, obviously he's not as quick. He will make it tricky with the control he has.

"I will be surprised if India change, the balance of their attack is pretty good," Cook said, unaware of the knee problem to Shami.

The captain felt the short mid-series break, when most of the team members travelled to Dubai after the third Test, was good to get their batteries recharged.

"The holiday was worthwhile, of course. Certainly the guys do feel re-energised, bit of a change of scenery. We had five days off in a long tour.

Mentally and physically it has done the players a world of good. People in the media and back home will only judge on how well we play. After those three games in three weeks it was good to get out and not really worry about cricket."

Comments
Topics mentioned in this article
India Cricket Team England Cricket Team Alastair Cook Haseeb Hameed Virat Kohli Wankhede India vs England 2016 Cricket
Get the latest updates on ICC T20 Worldcup 2022 and CWG 2022 check out the Schedule, Live Score and Medals Tally. Like us on Facebook or follow us on Twitter for more sports updates. You can also download the NDTV Cricket app for Android or iOS.