"Learnt To Stand Up, Give It Back": Virat Kohli Credits Sourav Ganguly For Winning Habit

This is India's third consecutive clean sweep in Tests, a record fourth successive win by an innings and a record seventh series triumph in the longest format. 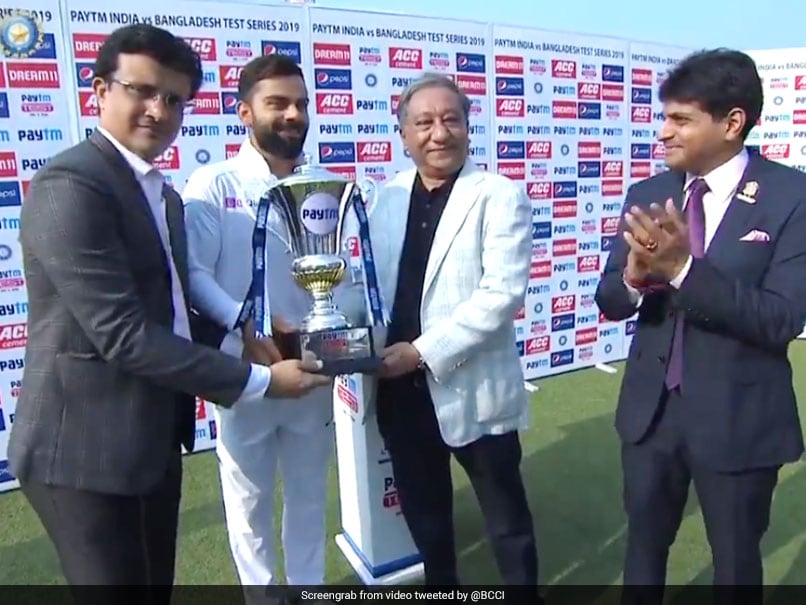 Virat Kohli thanked newly-appointed BCCI president Sourav Ganguly for cultivating a winning habit at the time of his captaincy, adding that the current team is "just carrying it forward". India defeated Bangladesh by an innings and 46 runs in the second Test to complete a 2-0 clean sweep over Bangladesh at Eden Gardens in Kolkata on Sunday. This is India's third consecutive clean sweep in Tests, a record fourth successive win by an innings and a record seventh series triumph in the longest format. "The idea is to establish yourself in the middle and we have learnt to stand up and give it back. It all started with Dada's team and we are just carrying it forward," India captain Virat Kohli said at the post-match presentation.

"The bowling group now is fearless and they believe in themselves playing against any batsman. We are reaping the rewards for all the hard work we put in the last 3-4 years," he added.

This was India's first-ever day-night Test and after making an impressive debut with the pink ball, the Indian skipper didn't hesitate to call the crowd support "amazing".

"The numbers have only gotten better. I think yesterday was even more than Day 1 and we didn't expect so many people would turn up today especially us having chance of finishing the game very early, but still to see so many people witnessing an Indian win in the stadium is special and I think it sets a great example and also reiterates the point I made about Test centres," Kohli said.

Kohli top-scored with 136 runs, including 18 boundaries, as India declared for 347/9 in reply to Bangladesh's first innings total of 106.

Ishant Sharma was the wrecker-in-chief for India as he claimed a five-wicket haul to bowl out Bangladesh for a paltry total after they opted to bat.

Ishant returned 4/56 in the second innings, besides a five-wicket haul by Umesh Yadav, to wrap Bangladesh for 195, with Mahmudullah retired hurt.

Heaping praise on his fast bowlers, Kohli said: "Only your belief can make you win. If you feel fast bowlers are not in the game then you are already into a negative mindset. With the way these guys are bowling now, they can pick up wickets on any surface at home or away."

India had earlier defeated Bangladesh 2-1 in a three-match T20I series.

Eden Gardens
Get the latest updates on Fifa Worldcup 2022 and check out  Fifa World Cup Schedule, Stats and Live Cricket Score. Like us on Facebook or follow us on Twitter for more sports updates. You can also download the NDTV Cricket app for Android or iOS.