With the win in Kolkata, India became the first side in Test history to register four consecutive victories by an innings. 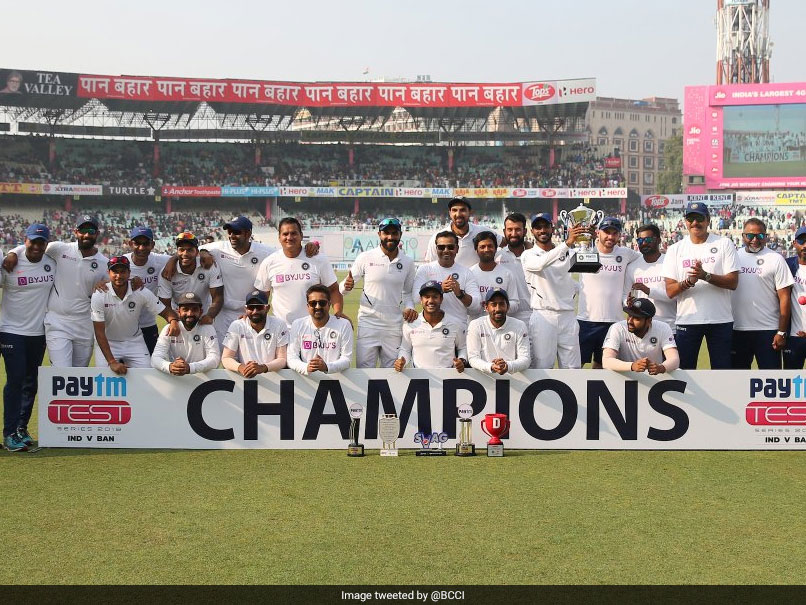 India annihilated Bangladesh to win the iconic day-night Test by an innings and 46 runs.© AFP

India annihilated Bangladesh to win the iconic day-night Test by an innings and 46 runs inside three days and claim the two-match series 2-0 at the Eden Gardens in Kolkata on Sunday. With the win, India became the first side in Test history to register four consecutive victories by an innings. Obviously, by the virtue of this win, Virat Kohli became the first captain to win four consecutive Test matches by an innings. The 2-0 win against Bangladesh was also India's third consecutive clean sweep since the beginning of the ICC Test World Championship in August this year. India had defeated the West Indies 2-0 in an away series and demolished South Africa 3-0 at home.

This is not all, with the win against Bangladesh in Indore, Virat Kohli had registered his 10th innings win as India's Test captain to go past MS Dhoni's tally of nine and with his 11th victory, the 31-year-old extended his own record.

As far as the match is concerned, Virat Kohli hit a sparkling century, his 27th in Tests and 70th in international cricket, to ensure India did not need to bat for the second time in their maiden day-night five-day game.

Kohli scored 136 as India declared their innings on 347/9 after Ishant Sharma rattled Bangladesh. The visitors were bowled out for 106 on the opening day.

Then Umesh Yadav claimed five wickets as Bangladesh were bowled out for 195 in the first session of play on Sunday.

Mushfiqur Rahim made a valiant 74 to top score for the visitors. Bangladesh innings folded at the loss of nine wickets as Mahmudullah did not return to bat after he had retired hurt on 39 on day two.

In the ICC World Test Championship, India extended their lead at the top of the table with 360 points from 7 wins.

Ishant Sharma India vs Bangladesh Cricket India vs Bangladesh, 2nd Test
Get the latest updates on Fifa Worldcup 2022 and check out  Fifa World Cup Schedule, Stats and Live Cricket Score. Like us on Facebook or follow us on Twitter for more sports updates. You can also download the NDTV Cricket app for Android or iOS.