Sanjay Manjrekar tweeted one of his pictures from the ongoing day-night Test between India and Bangladesh at Eden Gardens. 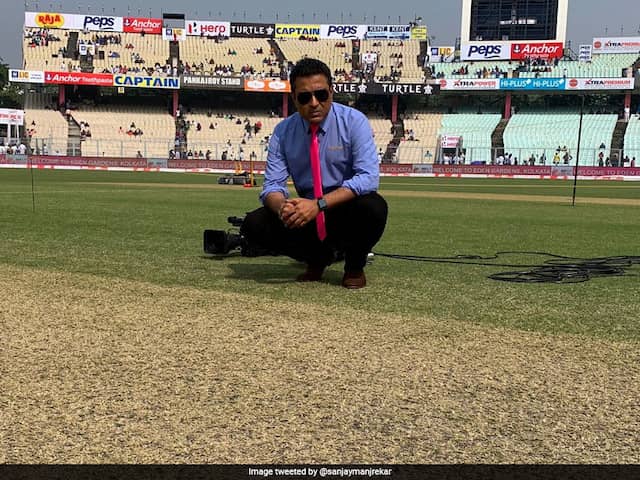 India are playing Bangladesh in their first-ever pink ball Test in Kolkata.© Twitter

Sanjay Manjrekar became a victim of social media trolls once again after he tweeted one of his pictures from the ongoing day-night Test between India and Bangladesh at Eden Gardens. "Love my job!" cricketer turned commentator Sanjay Manjrekar captioned the photograph on Twitter. However, some of the cricket fans who aren't much impressed with Sanjay Manjrekar's commentary came up with hilarious memes in reply to the former India batsman's tweet. "Therefore, we love the mute button on our tv remote," a user said on Twitter.

"But we all love you in bits and pieces," said another user, reminding Manjrekar of the comment that he made on India all-rounder Ravindra Jadeja.

Therefore, we love the mute button on our tv remote.

BUT WE ALL LOVE U IN BITS N PIECES

Fans listening to your commentary. pic.twitter.com/FpgVMA60ou

During the 2019 World Cup in the UK, Manjrekar was quoted as saying by IANS: "I am not a big fan of bits and pieces players which Jadeja is at this point of his career in 50-over cricket. In Test matches, he is a pure bowler. But in 50-over cricket, I would rather have a batsman and a spinner."

While fans slammed Manjrekar for his "bits and pieces" remark, Jadeja too didn't take much time to hit back. The all-rounder took to Twitter to express his anger over the criticism he received from the former India batsman.

"Still I have played twice the number of matches you have played and I'm still playing. Learn to respect people who have achieved. I have heard enough of your verbal diarrhoea.@sanjaymanjrekar," Jadeja had tweeted.

Under the captaincy of Virat Kohli, India are currently playing Bangladesh in their first-ever pink ball Test -- second match of the two-Test series -- in Kolkata.

Eden Gardens Cricket India vs Bangladesh, 2nd Test
Get the latest Cricket news, check out the India cricket schedule, Cricket live score . Like us on Facebook or follow us on Twitter for more sports updates. You can also download the NDTV Cricket app for Android or iOS.