India use the SG balls in Tests on their home soil, preferring them over the Kookaburra ball, which feature in most other Test nations including Australia 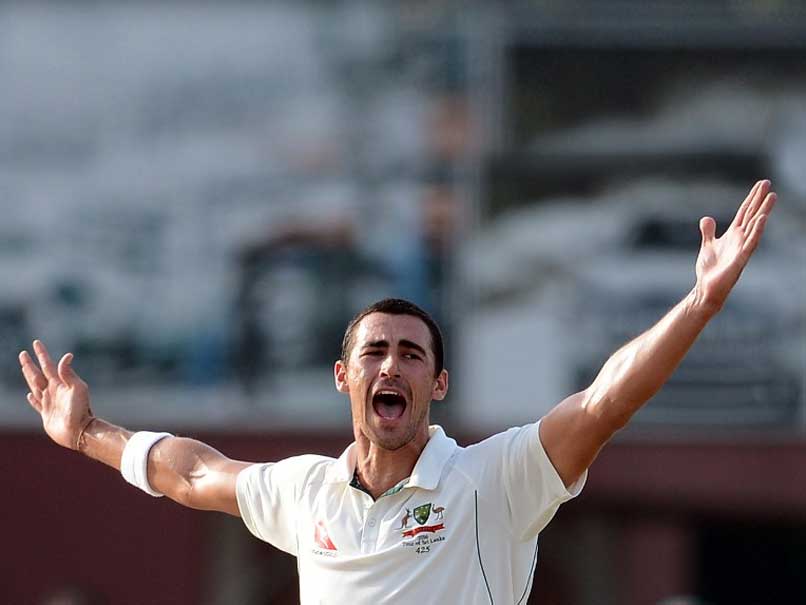 Mitchell Starc will be key to Australia in the upcoming series.© AFP

With Team India in maraudingform in Test cricket and having dominated on home conditions in the last few months, Australia are set to embark on a major challenge when they visit the South Asian nation for a four-match Test series later this month. Indian batsmen have been in superb form in recent times, and the onus will be on the visiting bowlers to make sure they don't let the hosts run riot with the bat again. Pacer Mitchell Starc says he hopes to extract some swing from the SG balls in Indian conditions.

The SG balls are used by India in Tests on their home soil, preferring them over the Kookaburra ball, which feature in most other Test nations including Australia. One of Starc's major focuses during Australia's pre-tour camp here has been getting the feel for a different ball in his hands.

"It's been a while since I have been over there to play red-ball cricket, it's been four years," Starc said after Australia's intra-squad practice match at the ICC Global Cricket Academy in Dubai.

"It's a different ball (there in India), so there are different challenges there to try and get it reversing and to see if it swings when it's brand new," said the left-arm pace spearhead.

There has been some debate about how to use Starc and fellow quick Josh Hazlewood in India for the Test series beginning on February 23 in Pune.

But the 27-year-old Starc says he expects captain Steve Smith to use him in short, sharp spells in a bid to maximise his potency against India's batsmen, though the duration of his bowling stints may be affected by the effectiveness of Australia's slow bowlers.

"I guess it depends on the spinners, if they're taking wickets or not. It's obviously up to Smithy. It's probably a bit different to how we are used back home.

"It will depend on how the ball is reacting, whether it's swinging conventionally or reverse.  I'm sure there'll be times when we will be called upon to bowl a few extra overs in a spell but probably a lot of short spells as well," said Starc.

Starc's first experience of Test cricket in India in 2013 could hardly have been more challenging. After going wicketless in the first Test in Chennai, he was dropped for the second match.

He earned a recall in the wake of the 'homework-gate' incident, which saw four players ruled out for disciplinary reasons by then-coach Mickey Arthur for the third Test in Mohali from which he took two wickets.

Starc missed the final game through injury as Australia slumped to a 4-0 series defeat, finishing with a return of two wickets at 100 for the series.

Despite his poor series in India in 2013, Starc has done an excellent job in Sri Lanka in Australia's Test tour there last year though they lost the series 3-0.

With 24 victims at 15.16 in Sri Lanka, Starc eclipsed Dennis Lillee's record (23 scalps against England in the 1979-90 home Ashes) for the most wickets taken by an Australian fast bowler in a three-Test series.

The left-armer also eclipsed Sir Richard Hadlee's mark of 23 wickets against Sri Lanka in 1984 for the most prolific three-Test series by a visiting paceman in Asia.

Naturally, Starc hopes to channel his success in Sri Lanka on the Test tour in India.

Comments
Topics mentioned in this article
Cricket India Cricket Team Australia Cricket Team Mitchell Starc India vs Australia 2017
Get the latest updates on ICC T20 Worldcup 2022 and CWG 2022 check out the Schedule, Live Score and Medals Tally. Like us on Facebook or follow us on Twitter for more sports updates. You can also download the NDTV Cricket app for Android or iOS.