Steve Smith, who scored an unbeaten 178 in the first innings, resisted for 68 balls second time around before Ravindra Jadeja's exploitation of the rough created by the bowlers' footmarks paid off. 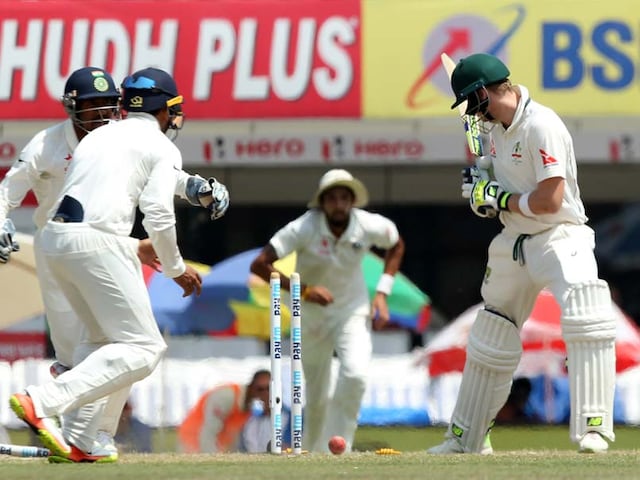 India vs Australia: Steve Smith was cleaned up by Ravindra Jadeja.© BCCI

India's Ravindra Jadeja took the big wicket of Australian captain Steve Smith to damage the visitors' hopes of salvaging a draw on the final day of the 3rd Test in Ranchi on Monday. Smith's wicket off the left-arm spin of Jadeja created the loudest noise at India's newest Test venue. Smith was on 21 when he tried to pad away a viciously turning delivery from Jadeja that spun from outside leg to knock out the right-handed batsman's off stump. Smith, who scored an unbeaten 178 in the first innings, resisted for 68 balls second time around before Jadeja's successfully exploited the rough created by the bowlers' footmarks.

Smith, who used the word 'brain fade' for the first time during the Bengaluru Test, was trolled by on Twitter after his dismissal.

Steve Smith just had a complete brain fade, or known in the cricketing industry as a "Kohli". #IndvAus #cmonladsdigin

Cricket Australia to fly Smith back home ... he just had his second #brainfade in 2 weeks!

Steve Smith ...what a big wicket. This has to be the ultimate brain fade this series so far.#IndvAus

That has to be one of the weirdest dismissals! #stevesmith #brain fade

The phrase 'brain fade' trended on Twitter following the DRS controversy in Bengaluru. After being given out LBW Smith was seen seeking an opinion from his dressing room on whether to review his leg-before dismissal during the second innings of the second Test.

The Australian captain later acknowledged his fault at the incident and dubbed it a 'brain fade'.

Virat Kohli later accused the Australian side of other such instances, where they looked towards the dressing room for help in reviewing decisions during the 2nd Test.

Comments
Topics mentioned in this article
India Cricket Team Australia Cricket Team Steven Smith JSCA International Stadium Complex, Ranchi India vs Australia 2017 Cricket
Get the latest Cricket news, check out the India cricket schedule, Cricket live score . Like us on Facebook or follow us on Twitter for more sports updates. You can also download the NDTV Cricket app for Android or iOS.