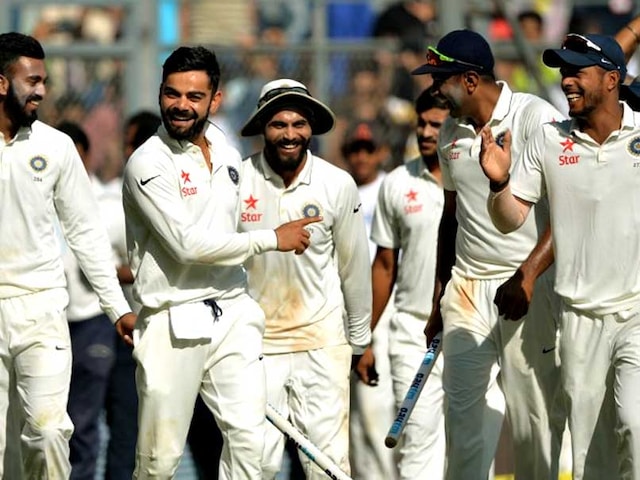 India will face Australia in a four-match Test series starting from February 23.© BCCI

The MSK Prasad-led selection committee of the Board of Control for Cricket in India (BCCI) on Tuesday retained the 16-member squad that beat Bangladesh in the one-off Test by 208 runs for the first two Test matches against Australia starting from later this month. Rohit Sharma and Amit Mishra, both of whom were recovering from injuries, have not been picked in the squad. Mohammed Shami, who recently recovered from a sore knee, also failed to make it to the squad. The first Test will be held in Pune from February 23 to 27, while Bengaluru will host the second match from March 4 to 8.

There were no surprises in the squad announced on Monday. Karun Nair, who was dropped in favour of Ajinkya Rahane for the Hyderabad Test against Bangladesh, has been retained in the squad.

On the other hand, Jayant Yadav, Abhinav Mukund, Hardik Pandya and Kuldeep Yadav, who too failed to make the cut to the final line-up for the Hyderabad Test against Bangladesh, also kept their places in the squad.

Pacer Mohammed Shami, who wasn't picked in the squad on Monday, had undergone rehabilitation with the team before being forced to leave for him owing to his father's death. He had also undergone a surgery to recuperate from a career-threatening knee injury.

The Virat Kohli-led Indians, who are on a 19-match unbeaten streak, are scheduled to play four Tests against Australians. The last two Tests are scheduled to be held in Ranchi (March 16-20) and Dharamsala (March 25-29).

Comments
Topics mentioned in this article
Cricket India Cricket Team Australia Cricket Team Virat Kohli India vs Australia 2017 BCCI
Get the latest Cricket news, check out the India cricket schedule, Cricket live score . Like us on Facebook or follow us on Twitter for more sports updates. You can also download the NDTV Cricket app for Android or iOS.