Women's World Cup: Mithali Raj-led Team India suffered a heartbreaking loss to South Africa in Christchurch on Sunday, which ended their hopes of reaching the semi-finals. 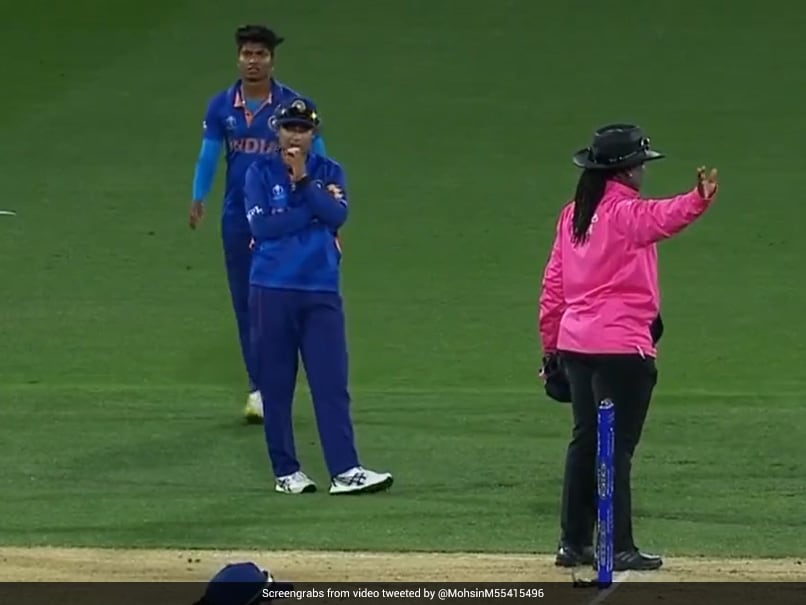 Women's World Cup: A no-ball in the final over of the match vs South Africa cost India dear.© Twitter

A nail-biter in Hagley Oval, Christchurch saw Team India crashing out of the ongoing ICC Women's World Cup and the players were left visibly distraught. Team India showed great grit and fighting spirit and managed to make a game out of it. Defending 275, Team India were in a spot of bother after Lara Goodall and Laura Wolvaardt put South Africa well on their way in the chase. But Indian spinners -- Deepti Sharma, Rajeshwari Gayakwad and Harmanpreet Kaur bowled in tandem and were able to create pressure on South Africa to take the match right down to the wire.

In the final over, South Africa needed seven runs and Mignon du Preez and Shabnim Ismail were at the crease. Eventually, the equation came down to three off two balls.

On the penultimate delivery, Du Preez was dismissed by Deepti as the batter handed a simple catch to Harmanpreet Kaur at long-on.

However, ecstasy turned into pure horror for the Indian players as the umpire signalled a no-ball. Replays showed that Deepti Sharma had overstepped by the barest of margins, which meant that Du Preez came back to the middle with South Africa needing 2 runs to win off the final 2 balls.

Mignon du Preez remained unbeaten on 52 for South Africa. Laura Wolvaardt also played a knock of 80 and she set the tone early for the Proteas. For India, Rajeshwari Gayakwad returned with two wickets.

In the end, after the match got over, the Indian players were visibly distraught. Team India finished their World Cup campaign with three wins from seven matches.

Australia, South Africa, England and West Indies are the four teams that have qualified for the semi-finals of the ongoing tournament. Australia will square off against West Indies on Wednesday while South Africa take on England on Thursday.

South Africa Women India Women vs South Africa Women, Match 28 ICC Women's World Cup 2022 Deepti Sharma Mignon du Preez Cricket
Get the latest updates on India vs South Africa and check out  Schedule, Results and Live Score. Like us on Facebook or follow us on Twitter for more sports updates. You can also download the NDTV Cricket app for Android or iOS.