Ravi Kumar gave India a dream start in their U-19 World Cup Super League quarter-final match against Bangladesh in Osbourn, Antigua on Sunday as he picked three early wickets. 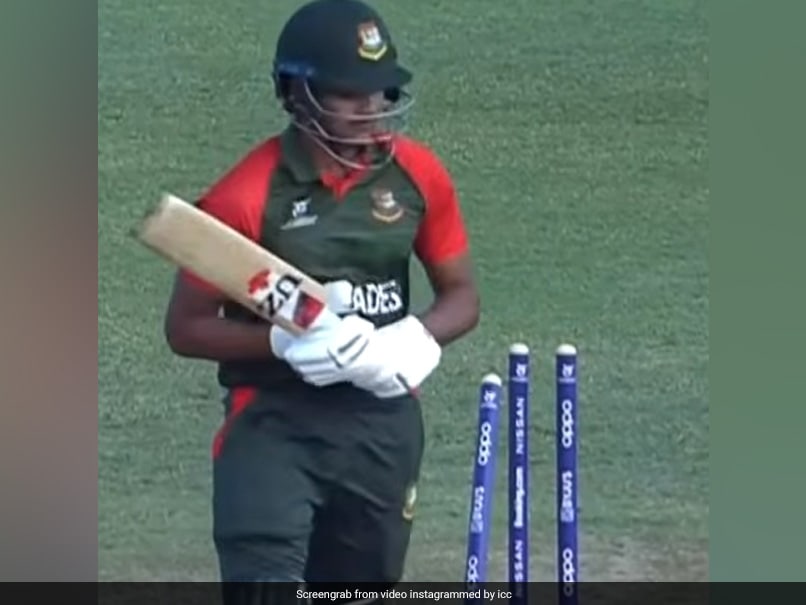 Ravi Kumar gave India a dream start in their U-19 World Cup Super League quarter-final match against Bangladesh in Osbourn, Antigua on Sunday as he picked three early wickets. Ravi dismissed Mahfijul Islam, Iftakher Hossain and Prantik Nabil to hand India a flying start to the match and leave Bangladesh in a spot of bother in the initial proceedings. Generating movement from the pitch, Ravi caused some serious trouble in Bangladesh's top-order. The young Indian pacer gave an indication of things to come when he sent Mahfijul back to the pavilion in just his third bowl of the match.
Producing movement with the ball in flight, Ravi managed to get through Mahfijul's defence and knock over his off-stump.

Watch the video of the dismissal here:

Nishant Sindhu, who had led India in the previous two matches when Dhull was ruled out due to COVID-19 infection, is missing the game after returning COVID-19 positive and is currently in isolation.

India barely managed to put a playing XI in the league stage as half a dozen players were isolated after contracting COVID-10 after the opening match against South Africa.

Dhull and other infected players reached Antigua on Friday morning after undergoing seven days of isolation in Trinidad.

The winner of this match will take on Australia in the semis of the tournament.

Bangladesh U19 Ravi Kumar Mahfijul Islam Cricket
Get the latest updates on Fifa Worldcup 2022 and check out  Fifa World Cup Schedule, Stats and Live Cricket Score. Like us on Facebook or follow us on Twitter for more sports updates. You can also download the NDTV Cricket app for Android or iOS.