India In ICC U19 World Cup Finals: A Brief History

India are the most successful nation when it comes to U19 World Cups, having won four titles. 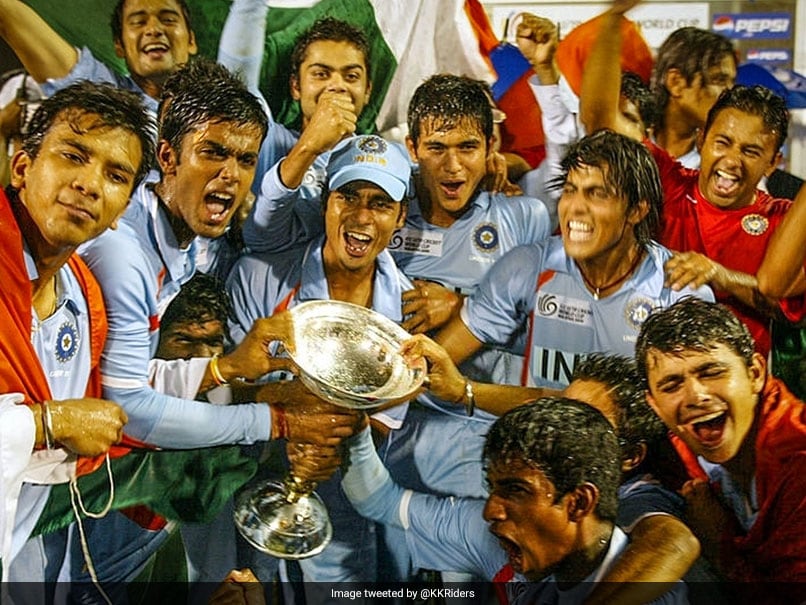 India will make their 8th appearance in the final of an U19 World Cup when they take on England in the summit clash later today at the Sir Vivian Richards Stadium in Antigua. India are the most successful nation when it comes to U19 World Cups, having won four titles. The current crop, led by skipper Yash Dhull, will eye a record-extending fifth title when they take the Tom Prest-led England in the final. Ahead of the match on Saturday, let's take a look at how India have fared in U19 World Cup finals:

After finishing 6th and 5th in the first two editions of the U19 World Cups, India finally tasted success when they defeated hosts Sri Lanka in the final by 6 wickets in Colombo.

Chasing a target of 179, the Mohammad Kaif-led team won the game with 56 balls to spare.

Aiming to win their second U19 World Cup title, India had to face defeat at the hands of neighbours Pakistan in the final in 2006.

After restricting Pakistan to a below-par total of 109, India were shocklingly bowled out for 71, thanks to Anwar Ali's five-for.

After losing in the 2006 final to arch-rivals Pakistan, India lifted their second U19 World Cup in 2008.

Under the leadership of Virat Kohli, India defeated South Africa in a dramatic final at the Kinrara Academy Ground in Kuala Lumpur.

After being bowled out for 159, Indian bowlers put on a match-winning shift to restrict the Proteas to a total of 103 for 8 after rain had interrupted the proceedings. ​

India had a disappointing campaign in 2010, as they finished sixth. However, two years later, India won a record-equalling third title in 2012.

In the final, India defeated the hosts and defending champions Australia by 6 wickets in Queensland.

Needing 226 to win, India skipper Unmukt Chand scored an unbeaten 111 as Will Bosisto's knock of 87 went in vain.

In a bid to win a record fourth U19 World Cup title, India took on the West Indies in the final at the Sher-e-Bangla Stadium in Dhaka in 2016.

However, after dominating throughout the tournament, India were beaten in the final by the Shimron Hetmyer-led Windies side.

Chasing 146, West Indies won the game by 5 wickets thanks to Keacy Carty's unbeaten 52.

India were at their best during the tournament in New Zealand as they went on to end their wait of lifting a record fourth title.

The summit clash was repeat of 2012 final, where India had beaten hosts Australia in Queensland.

Manjot Kalra stamped his authority in the match, slamming an unbeaten 101 in the final at Bay Oval against Australia.

India won the match by 8 wickets and lifted their fourth title.

India had to face disappointment in the final for the second time in three editions, losing to Bangladesh in a rain-hit final in Potchefstroom, South Africa in 2020.

After being put into bat, India could only manage a total of 177, despite Yashasvi Jasiwal's 88.

Bangladesh pulled off a major upset as they chased down the revised target of 170 with three wickets to spare.

England U19 Yash Dhull Vicky Ostwal Tom Prest ICC Under 19 World Cup 2022 Cricket England Under-19 vs India Under-19, Final
Get the latest updates on ICC T20 Worldcup 2022 and CWG 2022 check out the Schedule, Live Score and Medals Tally. Like us on Facebook or follow us on Twitter for more sports updates. You can also download the NDTV Cricket app for Android or iOS.