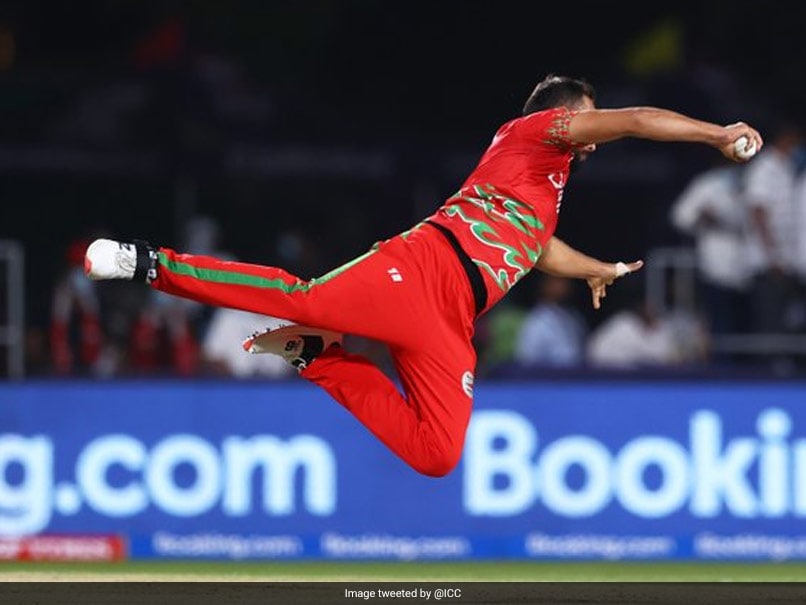 Oman fast bowler Fayyaz Butt was in top form with the ball against Bangladesh in his team's second match of the ongoing T20 World Cup 2021 at the Al Amerat Cricket Ground on Tuesday. The right-arm pacer picked up three wickets that helped Oman restrict Bangladesh to 153 runs in 20 overs. While bowling his second over, Butt grabbed everyone's attention with a spectacular follow-through catch of Mahedi Hasan. Mahedi was promoted up the order to bat at No.3 but he failed to read a short-of-length swinging ball from Butt and got out on a duck. ICC also shared a video of this catch, which they captioned: "A SCREAMER of a catch from Fayyaz Butt. Mahedi Hasan is gone for a duck! #T20WorldCup."

Watch the video of the catch here:

Apart from Butt, Bilal Khan also picked up three wickets for Oman. Mohammad Naim was the top-scorer for Bangladesh as he scored 64 runs and added 80 runs with Shakib Al Hasan (42) for the third wicket.

Later, while chasing the target of 154 runs, Jatinder Singh top-scored for Oman but failed to take his side past the finishing line as middle-order batters crumbled in the chase of 154 runs.

Favourites Bangladesh are still alive in the tournament after a victory in their must-win game against Oman. However, the Mahmudullah-led side is still in third spot in Group B with two points, while Scotland (four points) sit atop the group standings.

Oman also have two points but are second due to their superior net run as compared to Bangladesh. Both teams have one more game left in first round.

Bangladesh Cricket Team Fayyaz Butt Mahedi Hasan Cricket
Get the latest updates on Fifa Worldcup 2022 and check out  Fifa World Cup Schedule, Stats and Live Cricket Score. Like us on Facebook or follow us on Twitter for more sports updates. You can also download the NDTV Cricket app for Android or iOS.