T20 World Cup 2021: Keeping their Super 12 hopes alive, Bangladesh edged past Oman to seal a win in Group B on Tuesday. 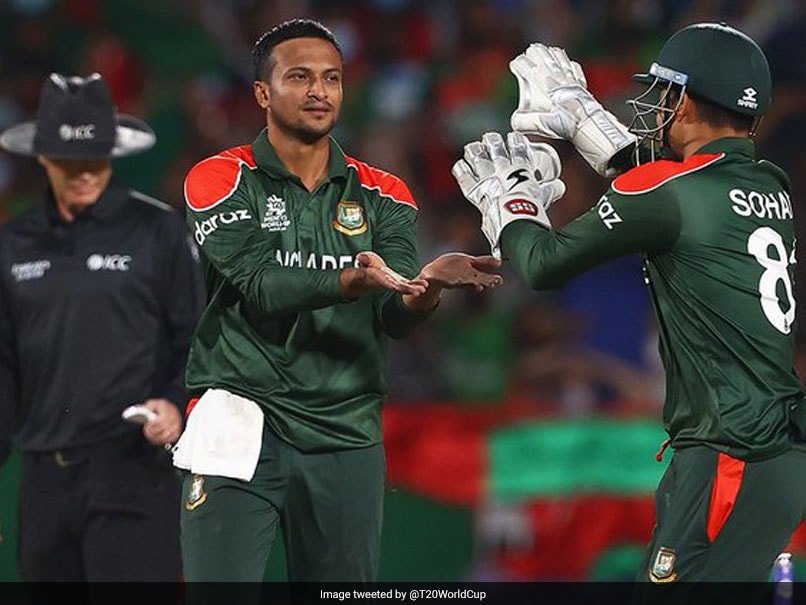 Bangladesh kept their hopes of advancing to Super 12s stage alive with a nervy 26-run win over co-hosts Oman in their Group B match of the T20 World Cup on Tuesday. Opener Mohammad Naim struck a fine half-century to help Bangladesh set a 154-run target before bowlers led by star pacer Mustafizur Rahman (4/36) restricted Oman to 127 for 9. Both Oman and Bangladesh now have one win each, and will be vying for the only remaining spot to qualify for the Super 12 stage. Scotland, who beat Papua New Guinea earlier in the day, have already qualified from the group.

While Oman will take on Scotland, Bangladesh next play Papua New Guinea.

Chasing a challenging target, Ludhiana-born Jatinder Singh (40 off 33) provided a solid start for Oman alongside Kashyap Prajapati (21) but the other batters struggled. Like Oman, Bangladesh were also guilty of dropping catches.

But under tremendous pressure, they held their nerves and thanks to some astute captaincy by skipper Mahmudullah and the spinners Shakib Al Hasan and Mahedi Hasan they were able to make a strong comeback.

Left-arm pacer Mustafizur Rahman took four wickets. Oman needed 54 runs in the last five overs. But with the boundaries drying up and the required run rate continuously increasing, Oman batters became desperate and went for the big shots, losing their wickets in the process.

Shakib, who starred with the bat also pitched in with the ball, ending with impressive figures of 3/28 while Mahedi Hassan (1/14) and Mohammad Saifuddin (1/16) took a wicket each. Opting to bat in a must-win game, Bangladesh, who lost their tournament opener to Scotland, struggled to 29 for the loss of two wickets in the powerplay.

With their backs up against the wall, Naim, who hit 64 of 51 deliveries, and star all-rounder Shakib Al Hasan (42 off 29) shared an 81-run stand to give their side the much-needed momentum. Dropped catches and sloppy fielding only added to the two batters' increasing confidence.

While Fayyaz Butt, who played U-19 cricket for Pakistan, pulled off a stunning catch of his bowling to get rid of Mahedi Hasan for a duck, Oman were guilty of dropping as many as three catches. Naim, playing his first game of the tournament, hit four maximums and three boundaries while Shakib's innings was studded with six fours.

However, a brilliant piece of fielding that saw Aqib Ilyas effect Shakib's run out that saw the spring return in Oman's step. The co-hosts seized the momentum, snaring six wickets while giving away 41 runs in the last five overs.

Shakib Al Hasan Bilal Khan ICC T20 World Cup 2021 Mohammad Naim Oman vs Bangladesh, Match 6 Cricket
Get the latest updates on SA vs IND 2021-22, check out the Schedule and Live Score . Like us on Facebook or follow us on Twitter for more sports updates. You can also download the NDTV Cricket app for Android or iOS.