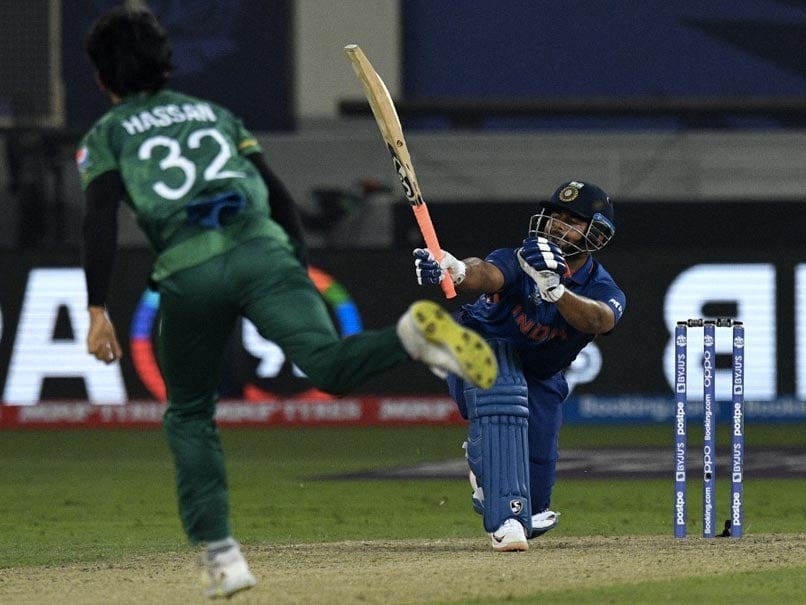 India had a nightmare outing against Pakistan in their T20 World Cup opener in Dubai on Sunday. But amid the doom and gloom, there were still some positives for Team India. Captain Virat Kohli hit a fighting half-century while Rishabh Pant too made a handy contribution with the bat. Fans across the world got a glimpse of Pant's "ridiculous" hitting prowess as the wicket-keeper batter smacked back-to-back sixes off Pakistan pacer Hasan Ali -- both one-handed.

The first maximum was a one-handed swipe to the square leg boundary while the second one flew straight over the bowler's head and over the boundary ropes.

However, Pant could not carry on with the same tempo and was caught and bowled by Shadab Khan in the 13th over of India's innings.

Here is the video of Pant's back-to-back one-handed sixes:

India made a disastrous start to the game with openers KL Rahul and Rohit Sharma dismissed early. Rahul could only muster three off eight balls while Rohit was sent back to the pavilion for a golden duck.

Virat Kohli top-scored for his side with a half-century, slamming 57 off 49 deliveries.

Shaheen Afridi was in terrific form for Pakistan and took three wickets in his four overs. His dismissals that of Rohit Sharma, KL Rahul and Virat Kohli.

Openers Mohammad Rizwan and Babar Azam were in brilliant form and remained unbeaten. Rizwan registered 79 off 55 balls and his captain played a knock of 68 in 52 deliveries.

Hasan Ali Cricket Social
Get the latest updates on Fifa Worldcup 2022 and check out  Fifa World Cup Schedule, Stats and Live Cricket Score. Like us on Facebook or follow us on Twitter for more sports updates. You can also download the NDTV Cricket app for Android or iOS.