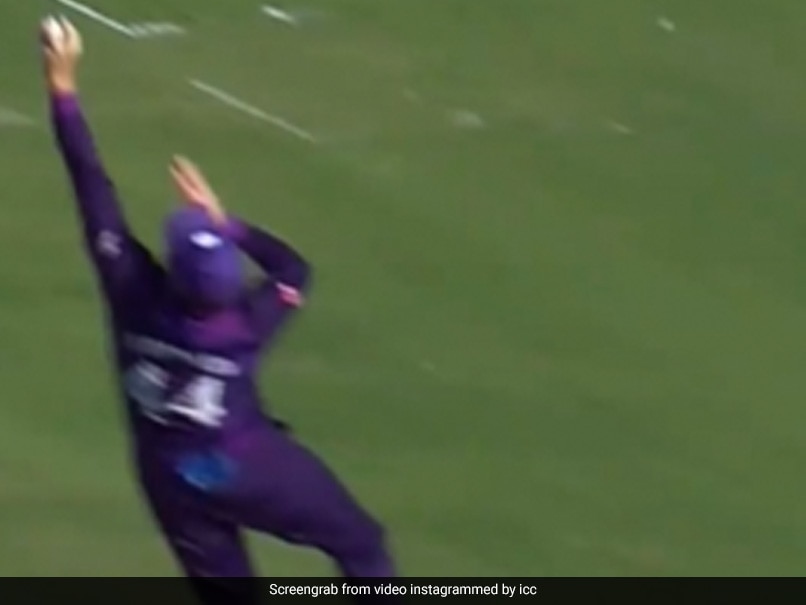 Richie Berrington was in top form as Scotland defeated Papua New Guinea by 17 runs in their Group B Round 1 fixture of the ongoing T20 World Cup 2021 at the Al Amerat Cricket Ground on Tuesday. The 34-year-old smashed 70 off 49 balls and also put in a stunning catch during Papua New Guinea's chase. On the final delivery of the sixth over, Josh Davey sent a full ball to batsman Simon Atai. Atai tried to go for a smashing drive but ended up slicing it towards point where Berrington took a brilliant one-handed catch. ICC shared the highlight on their social media handles and captioned it as, "Richie Berrington, not satisfied in impressing with just the bat, decides to give us a masterclass in the field too".

Initially, Scotland won the toss and opted to bat. Berrington's swashbuckling knock helped his side post 165 for nine in 20 overs. Matthew Cross also made a noteworthy contribution with a knock of 45 runs in 36 balls.

Chasing a target of 166, Papua New Guinea were bowled out for 148 in 19.3 overs with Josh Davey taking four wickets in 3.3 overs. Davey conceded only 18 runs.

Norman Vanua played a decent knock for his side, registering 47 off 37 balls.

With the win, Scotland are now on top of Group B while Papua New Guinea have been knocked-out with a match to play in the group.

Richie Berrington ICC T20 World Cup 2021 Scotland vs Papua New Guinea, Match 5 Cricket
Get the latest updates on IPL Auction 2023 and check out  IPL 2023 and Live Cricket Score. Like us on Facebook or follow us on Twitter for more sports updates. You can also download the NDTV Cricket app for Android or iOS.