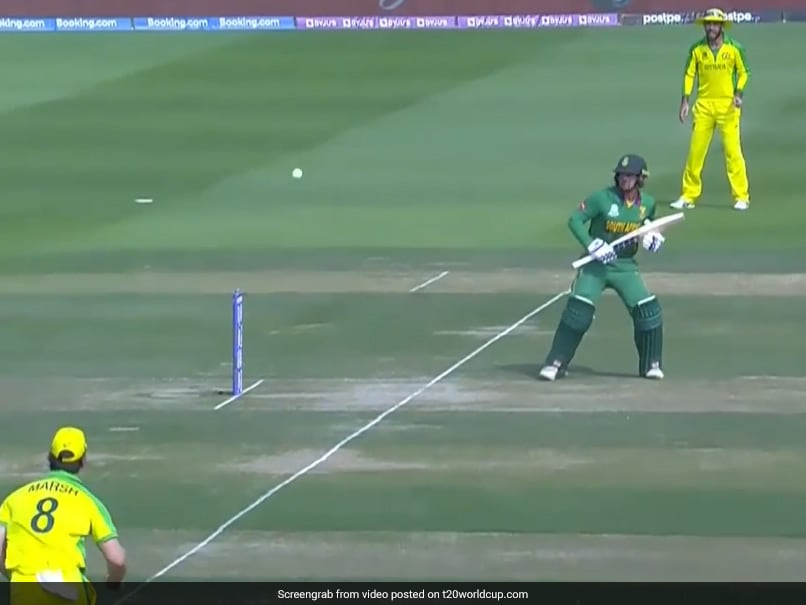 South Africa got off to the worst possible start in their T20 World Cup Super 12 clash against Australia in Abu Dhabi on Saturday. Glenn Maxwell and Josh Hazlewood struck early to leave South Africa reeling at 23 for three in the fifth over. Maxwell cleaned up Temba Bavuma and in the very next over Hazlewood sent Rassie van der Dussen packing. It was the dismissal of their opening batter Quinton de Kock that caught the attention of fans, with some terming it as the "strangest dismissal of the tournament". De Kock was looking to play the ball towards fine-leg but missed the shot and the ball lobbed off his body and went on to the stumps.

A fan tweeted that the dismissal is already a contender for the strangest dismissal of the tournament award.

Here are some of the reactions on De Kock's dismissal:

i have just seen quinton de kock's dismissal...words? i have none

Ohh dear!! It's a bizarre way to get out quinton de kock!

Maxwell castled South Africa skipper Bavuma for 12 in the second over of the match.

Hazlewood then struck twice to push South Africa on the back foot.

Aiden Markram and Henrich Klassen tried to steady the ship but their 23-run stand was broken by Pat Cummins. He removed Klassen for 13.

Leg-spinner Adam Zampa struck twice in an over to remove David Miller and Dwaine Pretorius.

Markram was the top-scorer with a knock of 40 as South Africa posted 118/9 in their allotted 20 overs.

Josh Hazlewood ICC T20 World Cup 2021 Australia vs South Africa, Super 12 - Match 13 Cricket
Get the latest updates on ICC Women's Cricket World Cup 2022 and IPL 2022, check out the Schedule , Live Score and IPL Points Table. Like us on Facebook or follow us on Twitter for more sports updates. You can also download the NDTV Cricket app for Android or iOS.