T20 World Cup: Scotland players went to meet the Indian team in their dressing room after the completion of the Group 2 fixture between the two sides at the Dubai International Stadium on Friday. 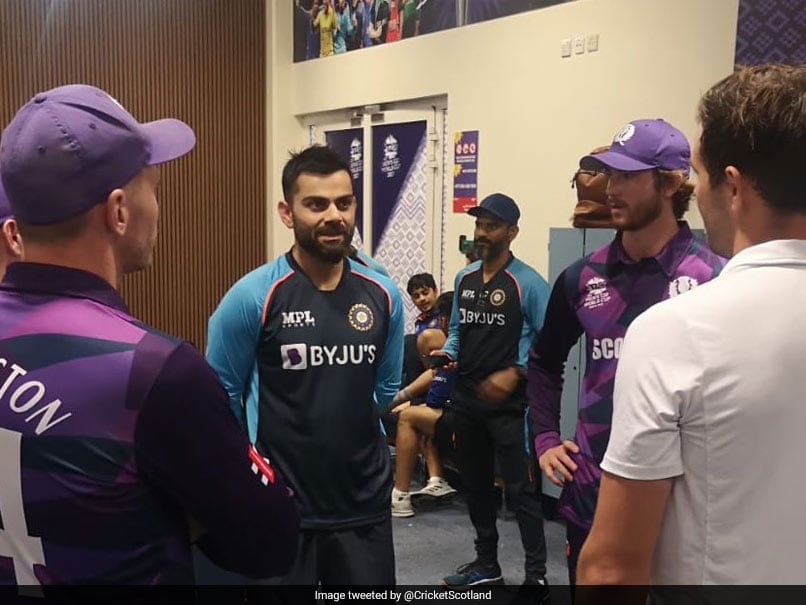 Scotland players went to the Indian team dressing room after the completion of the T20 World Cup Group 2 game between the two sides at the Dubai International Stadium on Friday. Kyle Coetzer, the Scotland skipper, had earlier stated that his team would love to have a chat with some of the best in the game and learn a trick or two. This would help them promote the sport in the country and improve the current squad.

"We would, they are excellent ambassadors of the game. We want our guys to speak to them, be it (Virat) Kohli or (Kane) Williamson or Rashid Khan. That is the only and best way to learn. We used to be able to do it in the pubs before, but now we cannot," Coetzer had said.

Team India, led by mentor MS Dhoni, fulfilled their wish as they welcomed the Scotland players in their dressing room. The Board of Control for Cricket in India (BCCI) posted a video on Saturday, where the likes of Dhoni, Kohli and Rohit Sharma are seen having a chat with the Scotland players.

MUST WATCH: #SpiritOfCricket was at its best as Scotland expressed their wish to visit the #TeamIndia dressing room & our boys made them feel at home🤝👌👌 - By @Moulinparikh

Coetzer had also said that standing next to his Indian counterpart, Kohli, would be a special moment for anyone since he is a role model for the game.

India put in an all-round show against Scotland and won the game by 8 wickets in Dubai on Friday. India managed to bowl out Scotland for a paltry score of 85 as Ravindra Jadeja and Mohammed Shami took three wickets each while Jasprit Bumrah scalped two wickets.

Virat Kohli and his team now have an outside chance of qualifying for the T20 World Cup semi-finals. They will have to win their remaining game against Namibia on Monday and hope that Afghanistan beat New Zealand when the two teams meet on Sunday.

Kyle Coetzer ICC T20 World Cup 2021 Cricket
Get the latest updates on ICC T20 Worldcup 2022 and CWG 2022 check out the Schedule, Live Score and Medals Tally. Like us on Facebook or follow us on Twitter for more sports updates. You can also download the NDTV Cricket app for Android or iOS.