Adil Rashid bowled a majestic spell of 4/2 as England bowled out the West Indies for 55 in the T20 World Cup on Saturday. 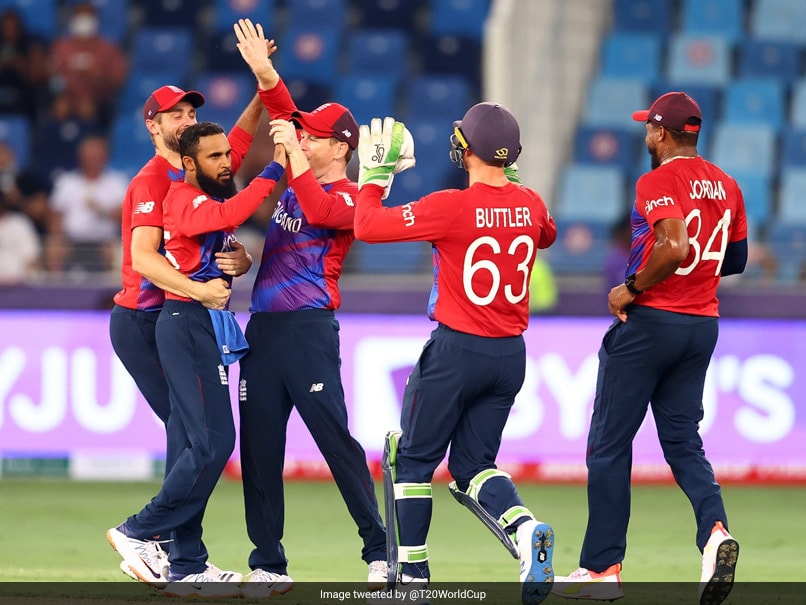 Adil Rashid bowled a majestic spell of 4/2 as England bowled out the West Indies for 55 in the second match of the Super 12 stage of the ongoing T20 World Cup at the Dubai International Stadium on Saturday. Powered by the sensational bowling of Rashid and his fellow bowlers, England won the game comfortably by six wickets. After winning the toss, England skipper Eoin Morgan opted to bowl first in Dubai. West Indies got off to a horrid start, losing five wickets inside the first eight overs.

Chris Woakes got the ball rolling for England after he dismissed in-form opening batsman Evin Lewis in the second over of the Windies innings. Moeen Ali then dismissed both Lendl Simmons and Shimron Hetmyer in the third and fifth overs, respectively.

Pacers Tymal Mills and Chris Jordan then got the better of Chris Gayle and Dwayne Bravo, respectively, before the former also gave Nicholas Pooran his marching orders in the 9th over. After that, it was the Adil Rashid show.

He castled Andre Russell for a duck in the 11th over, before dismissing both Kieron Pollard and Obed McCoy on the first two deliveries of the 13th over. Rashid was on a hattrick, but Ravi Rampaul held his ground to deny the former his first T20I hattrick.

The 33-year-old finally wrapped up West Indies' innings by castling Rampaul in the 15th over, ending the match with his career-best T20I figures of 4/2. These are also the best figures by an Englishman in T20Is.

The previous record was held by Chris Jordan, who had finished with figures of 4/6, also against West Indies.

Adil Rashid Cricket
Get the latest updates on ICC Women's Cricket World Cup 2022 and IPL 2022, check out the Schedule , Live Score and IPL Points Table. Like us on Facebook or follow us on Twitter for more sports updates. You can also download the NDTV Cricket app for Android or iOS.