In a no-holds-barred talk with the media at the Gaddafi Stadium in Lahore, Misbah-ul-Haq said his detractors had always blamed him for every possible wrong with Pakistan cricket. 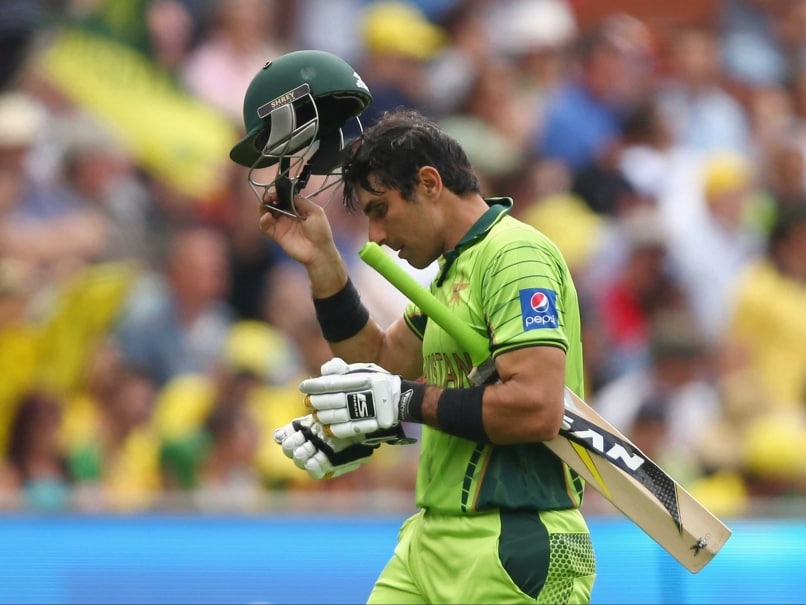 Misbah-ul-Haq was unable to take Pakistan beyond the quarters of the World Cup.© Getty Images
Karachi:

Pakistan captain Misbah-ul-Haq lashed out at his critics for holding him responsible for blaming him "for whatever happens in the national team", saying that he did not have the final word in most matters, including the selection of playing eleven.(Misbah a Defensive Skipper: Inzamam)

He also said that his decision to retire from ODI cricket was final and his critics should now be happy on his quitting from the shorter format of the game.(Pakistan Batting vs Australia Awful)

In a no-holds-barred talk with the media at the Gaddafi Stadium in Lahore, Misbah said his detractors had always blamed him for every possible wrong with Pakistan cricket.Â(Pakistan Pin Hopes on Struggling Next Generation)

"Let me tell you I was not responsible for the attack on the Sri Lankan team nor for the present state of Pakistan cricket," said Misbah who led Pakistan to quarterfinals in the ongoing cricket World Cup.

"I am always blamed for whatever happens in the team without my critics realising that not all the time am I alone responsible for taking decisions," he added.

Misbah said that some players who had played with him were biased in their comments on him while others who have played for Pakistan used very harsh language for him and the team.

The 40-year-old admitted that after losing the first two World Cup matches, he had come under immense pressure which was why his strike rate remained low. He said the team should be given some credit for making it to the last eight stage despite suffering from multiple problems like injuries and unavailability of key bowlers.

Misbah, who will continue to lead the Test side, said that the captain in the present system was not the final authority in selection matters. He said the national selection committee finalised the team and the captain could only recommend players.

"The captain can give his advice but he is not the final authority. I would advise the cricket Board to review the present selection system and give final say to the captain and coach of the team. I think the coach and captain should have the authority to make selections," said after meeting with the Pakistan Cricket Board officials.

Misbah made it clear that the selection committee to played senior all-rounder Shahid Afridi in all games as there was no other option.

"We did not have any other option for Afridi, an all-rounder who could bowl and bat at number six or seven. So it was our constraint to keep on playing him," said Misbah.

Afridi, who has also retired from ODIs but will lead the national T20 side, had a horrible World Cup, taking just two wickets in seven matches.

Misbah also insisted the team management had nothing personal against wicketkeeper-batsman Sarfraz Ahmed.

"Initially, Sarfraz Ahmed in four or five matches was not able to adjust to the conditions in New Zealand and Australia and had difficulties batting so we did not play him. It was nothing personal," he said.

Misbah said that Pakistan's batting and fielding had let them down in the World Cup.

"The batsmen just did not show enough intent and purpose and let us down while the fielding in some matches was below par. It were the bowlers who got us to the quarterfinals and even against Australia they gave us a chance but the fielding let us down," he said.

"Bowling was our strong point and the bowlers played spectacularly. But our batting and fielding needs improvement," he said.

He also said that media houses should be careful who they allow to speak on cricket as experts.

"There should be a criteria for media appearances, if people come and criticise us wrongfully then no one will be motivated to play anymore for Pakistan."

Comments
Topics mentioned in this article
Pakistan Cricket Team World Cup 2015 Misbah-ul-Haq Cricket
Get the latest updates on ICC T20 Worldcup 2022, check out the Schedule and Live Score. Like us on Facebook or follow us on Twitter for more sports updates. You can also download the NDTV Cricket app for Android or iOS.