Ramandeep, Akashdeep and Harmanpreet were the goal scorers for India. 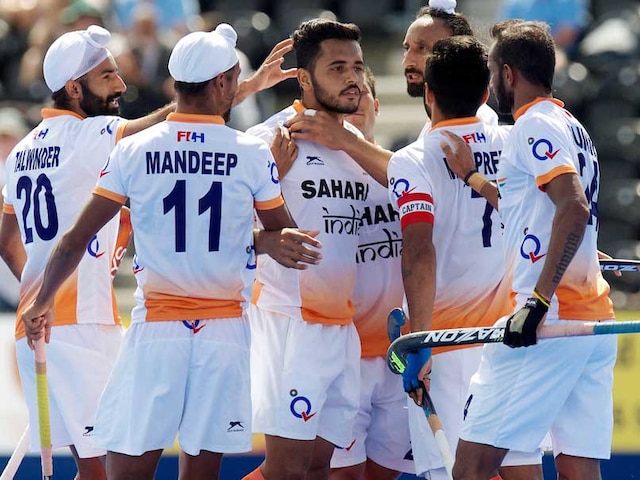 India conceded a surprise early goal but made a fine comeback by pumping in four quick goals to beat minnows Scotland 4-1 in their opening match of Hockey World League Semi-Finals on Thursday. Scotland captain Chris Grassick struck as early as the sixth minute to stun the Indians who trailed 0-1 till the end of the first two quarters. India, however, recovered and scored four times in the third quarter to run away with full points in the Pool B match. Ramandeep Singh (31st, 34th), Akashdeep Singh (40th), Harmanpreet Singh (42nd) were the goal scorers for India.

The first quarter belonged to the underdogs Scotland who displayed good attacking skills to put India on the backfoot. While the Scottish goalkeeper Thomas Alexander was impressive with his saves, it was skipper Chris Grassick who got an early lead for his team with a splendid deflection that beat Vikas Dahiya to the post in the sixth minute.

The ten-minute break at half-time was put to good use by India's chief coach Roelant Oltmans who brought about strategic changes to create opportunities in the circle. It worked wonders with forward Ramandeep Singh finding a breakthrough in the 31st minute. He struck a cracker of a goal with a reverse hit from the top of the circle, beating defender Willie Marshall to equalise. Ramandeep struck again in the 34th minute when forward SV Sunil assisted from the baseline. A perfect deflection by Ramandeep earned India a much-needed 2-1 lead.

In the 40th minute, it was India skipper Manpreet Singh who set up a goal for Akashdeep, who timed his run to perfection to receive the pass and deflect it past Alexander.

In the 42nd minute, a clever-thinking Sunil appealed for a video referral that saw India win their first penalty corner of the match. India's young drag flicker Harmanpreet Singh made no mistake with a brilliant effort, picking up the ball from injector Sardar Singh, to send the ball like a bolt to the top corner of the post.

India play their next Pool B match on June 17 against Canada.

Comments
Topics mentioned in this article
India Scotland Hockey
Get the latest Cricket news, check out the India cricket schedule, Cricket live score . Like us on Facebook or follow us on Twitter for more sports updates. You can also download the NDTV Cricket app for Android or iOS.