India will play Canada on June 17 followed by the much-anticipated clash against Pakistan on June 18 and the Netherlands on June 20. 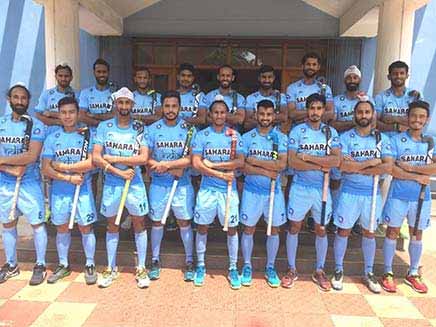 The team will be led by Manpreet Singh with Chinglensana Singh Kangujam as his deputy.© Hockey India

The Indian hockey team, after a series of consistent performances, will start their campaign in the Hockey World League (HWL) semis against lowly Scotland in London on June 15. With Scotland ranked 23rd in the world, India will look to capitalise on the goal margin. After Scotland, India will play Canada on June 17 followed by the much-anticipated clash against Pakistan on June 18 and the Netherlands on June 20. India will be led by mid-fielder Manpreet Singh in the absence of regular skipper PR Sreejesh, who is injured.

With the likes of Manpreet, Sardar Singh and vice-captain Chinglensana Singh, the Indians boast of a strong mid-field.

However, coach Oltmans will rely on Kothajit Singh and Harmanpreet Singh in the backline in absence of Rupinderpal Singh.

Rupinder, who is out due to an injury, will be replaced by Jasjit Singh Kular, who doubles up as a drag-flicker while Uthappa's has made place for Sumit.

Comments
Topics mentioned in this article
India Scotland Pakistan Hockey
Get the latest Cricket news, check out the India cricket schedule, Cricket live score . Like us on Facebook or follow us on Twitter for more sports updates. You can also download the NDTV Cricket app for Android or iOS.