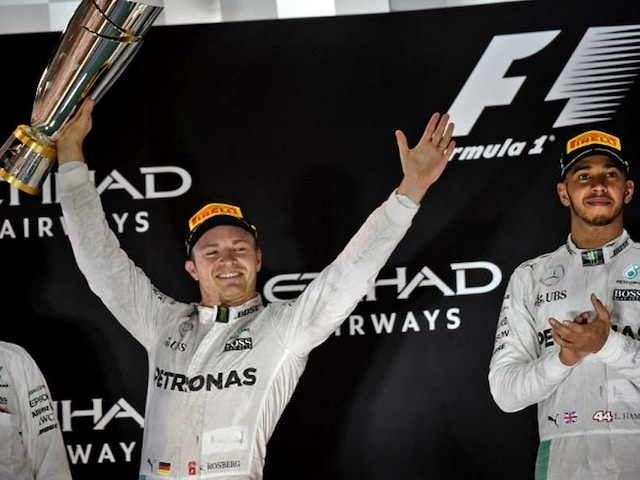 Lewis Hamilton says he is "sad but not surprised" at Nico Rosberg's sudden decision to quit Formula One.

Hamilton and Rosberg's careers have developed in tandem, from the go-kart circuits of their teenage years to F1 and the dominant Mercedes team.

And while Rosberg's revelation stunned F1 fans, his friend and fierce rival was unfazed by the news.

"I'm probably one of the only people that it was not a surprise to, but that's because I've known him for a long time," Hamilton told autosport.com in Vienna at F1's annual awards ceremony.

"This is the first time he's won in 18 years, hence why it was not a surprise that he decided to stop.

"But he's also got a family to focus on, having children, and Formula 1 takes so much of your time."

Three-time world champion Hamilton added: "We started out when we were 13 and we'd always talked about being champions.

"When I joined this team (Mercedes) Nico was there, which was again something we talked about when we were kids.

"It's going to be very very strange, and it will be sad not to have him in the team next year. The sport will miss him, and I wish him all the best."

We said we'd be champions back then, now we both are! Congratulations Nico, you did everything a champion needed to do. Well deserved pic.twitter.com/CIFPw1K2Fq

"I was very surprised, as I'm sure everyone is, but Nico has demonstrated across the year that he is extremely brave," the Frenchman said.

"I speak with a lot of emotion, because I knew him as a small boy.

"He was five, at the time I was head of Peugeot Motorsport and his father (former world champion Keke) was one of the drivers of the 905 Peugeot, so I had friendly links with his father, with his mother and the little boy that was there. He has had an amazing career since then."

Jamaican sprint legend Usain Bolt said he was bemused by the German's decision.

Bolt, due to retire himself next year, said from Monaco: "I can't understand. Everybody has their reasons for everything, but I really don't know.

"I guess he felt like he has gotten what he wanted.

"I think he said he had never won a championship and that's what he wanted. If you accomplish your goal, there's no reason to stay around. That's what you wanted, you got what you want, just move on."

Comments
Topics mentioned in this article
Formula 1 Mercedes Lewis Hamilton Nico Rosberg
Get the latest Cricket news, check out the India cricket schedule, Cricket live score . Like us on Facebook or follow us on Twitter for more sports updates. You can also download the NDTV Cricket app for Android or iOS.