Cristiano Ronaldo and Lionel Messi battled it out against each other one more time as PSG took on Al-Nassr Al-Hilal XI in a friendly match. The videos of the two GOATs' reunion has broken the internet. 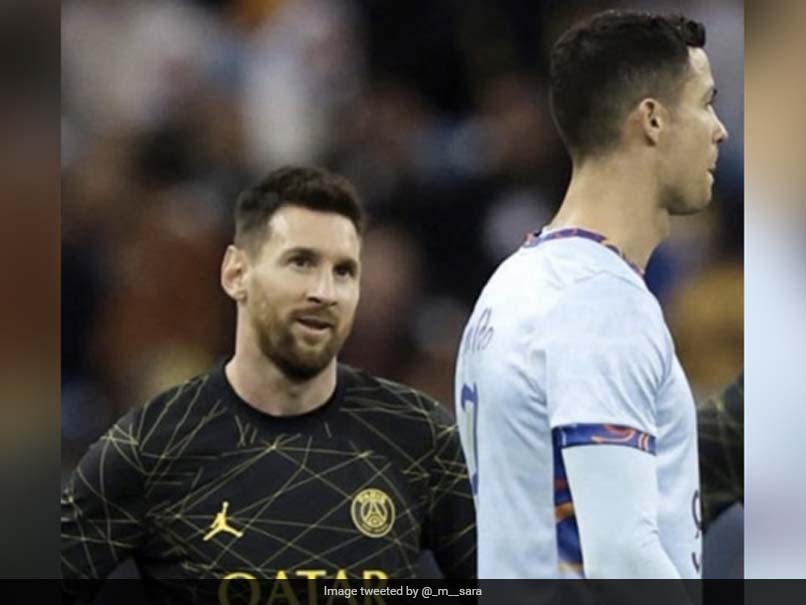 When Cristiano Ronaldo moved to Saudi Arabia, joining Al-Nassr in a potential USD 200 million deal, fans' hopes of seeing him play against Lionel Messi were all lost. But, the two superstars of the Beautiful Game were spotted on the same field again as Ronaldo featured for an All-Star XI against Messi's Paris Saint-Germain in a friendly clash on Friday. The demand for tickets at King Fahd Stadium had already skyrocketed, and millions gathered in front of their television sets to spot the two GOATs take on each other once again.

While Ronaldo was meeting a number of friends, including Sergio Ramos and Neymar, the internet broke loose when the Portuguese footballer greeted his greatest-rival Messi. The videos of Messi and Ronaldo's meet and greet gone viral on social media.

Love someone who looks at you like Messi looks at Cristiano Ronaldo #CR7 pic.twitter.com/d4Z5Q5hZAq

Leo Messi, Mbappé, and Neymar with Cristiano Ronaldo before the match! pic.twitter.com/alIddJMOhI

Cristiano Ronaldo and Lionel Messi embracing before a match for what might be the last time.

As for the match, PSG went down to 10-man after Juan Bernat was sent-off early in the game. Yet, the French club went on to secure a 5-4 victory over Al Nassr-Al Hilal XI, with Messi opening the scoring.

Ronaldo too scored a couple of goals but that wasn't enough for his team to prevent a defeat against the mighty Europeans.

It was only fitting that Messi and Ronaldo were the first ones to score, with the Argentine legend doing so just three minutes in. However, Ronaldo fought back and scored on a penalty kick in the 34th minute.

Defender Marquinhos gave PSG the lead again in the 44th minute. Ronaldo then managed his second goal, during the injury time of the first half, tying the match at the break.

The back and forth continued in the second half with Sergio Ramos giving PSG a short-lived 3-2 lead (53'). Jang Hyun-Soo levelled it at three all three minutes later.

French superstar Kylian Mbappe pushed PSG ahead - again - with a goal off a penalty kick at 60'.
Shortly after, Ronaldo (61') and Messi (62') came off the field.

Hugo Ekitike extended PSG's lead, scoring in the 78th minute to make it 5-3. Al Nassr never gave up with Anderson Talisca giving his side a fourth goal late in the game (90' 4') but it wasn't enough.

After the game, Ronaldo shared a beautiful post on social media, saying it was "nice to see some old friends".

Which Was The Most Precious Wish To Sania Mirza?
Comments
Topics mentioned in this article
Al-Nassr FC

Cristiano Ronaldo Football Social
Get the latest updates on IPL Auction 2023 and check out  IPL 2023 and Live Cricket Score. Like us on Facebook or follow us on Twitter for more sports updates. You can also download the NDTV Cricket app for Android or iOS.