Manchester United got a hiding from Tottenham Hotspur and their skipper Harry Maguire made no friends with his on-field exploits. 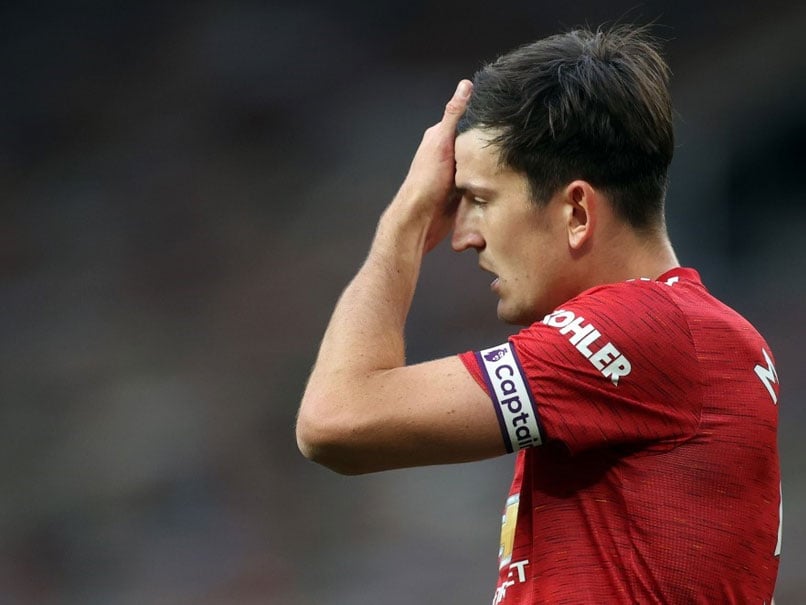 Harry Maguire had a nightmare outing in Manchester United's thrashing at the hands of Tottenham.© AFP

Manchester United were humiliated 6-1 by a rampant Tottenham Hotspur as Jose Mourinho made a dream return to Old Trafford. Manchester United were shambolic at the back, especially captain and the world's most expensive defender Harry Maguire. The Manchester United skipper was all over the place, possibly still thinking about his off-field problems. The calamitous defending was not restricted to Maguire as his partner Eric Bailly was just as bad in the match. However, one incident stood out during the match. With Manchester United leading 1-0, Maguire seemed to pull down his own defensive partner Luke Shaw in the box while he was trying clear the ball. It resulted in Tanguy Ndombele smashing the loose ball past David de Gea from close range to give Tottenham the equaliser.

Watch as Maguire tugs at his own teammate who is also being put under pressure by Erik Lamela.

Fans flooded Twitter and came up with some hilarious memes to troll the Manchester United defender.

Someone said Maguire was playing as a false 5 pic.twitter.com/Ir8HVhGOP3

Official agent who sold maguire for Manchester United as been arrested and jail for 15years pic.twitter.com/jZW9gf4FXJ

Leicester city needs to give us back our money , biggest scam in life. Maguire should not be in our first team i rather pair baily with lindelof. #OleOut pic.twitter.com/fLP3xHguvq

If you are having a bad day, remember Maguire once marked his own defenderpic.twitter.com/yDjIY1oVcu

84 - It has been eighty four days since Harry Maguire last marked his own teammate. He has done it again. pic.twitter.com/khVdlfO49H

The defeat was Manchester United's worse since 2011. Manchester United did have a man sent off with Anthony Martial being shown a red card in the first half, may be wrongly so. But even before the sending off, United's defence was in sixes and sevens with Maguire the biggest liability.

Manchester United spent around 80 million pounds to Leicester City in 2017 to get the services of Maguire -- a world record for a defender, but the centre-back has done little to pay it back.

Son Heung-min and Harry Kane had a field day against Manchester United on Sunday, both bagging a brace as Spurs to sixth in the Premier League table.

After the match, Ole Gunnar Solskjaer said that it was the "worst day I've had as a Manchester United manager" but he could be in for more of the same if United continue to defend the way they did against Spurs.

After three matches played this season, Manchester United have already lost two, winning one and languish in 16th place in the table.

Son Heungmin English Premier League Football
Get the latest updates on India vs South Africa and check out  Schedule, Results and Live Score. Like us on Facebook or follow us on Twitter for more sports updates. You can also download the NDTV Cricket app for Android or iOS.