England vs India: Ajinkya Rahane and Cheteshwar Pujara's 100-run stand kept India alive in the game, but three late wickets mean England will be looking to go for the win on the final day. 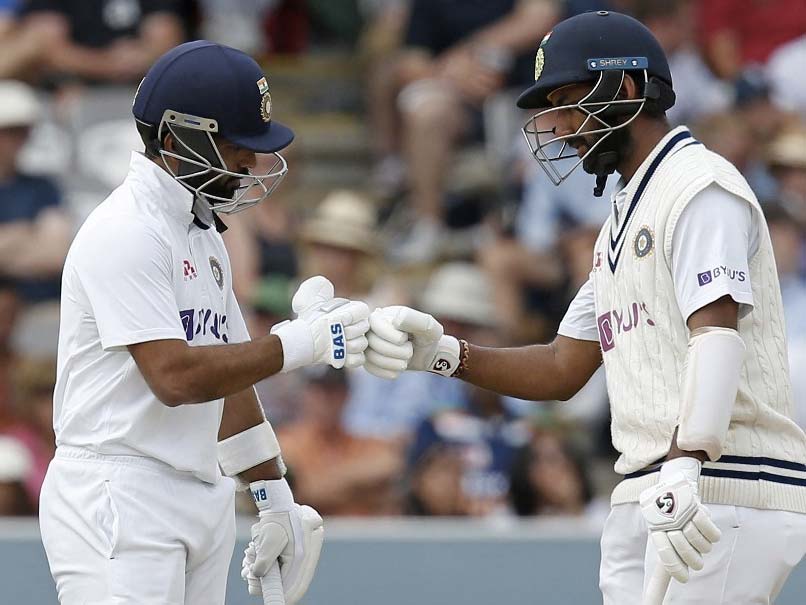 England's Mark Wood and Moeen Ali struck late on against India at Lord's on Sunday to leave the second Test intriguingly poised heading into the last day. The tourists were 181-6 in their second innings, a lead of 154 runs, when bad light forced an early close. The start of a fourth day of fluctuating fortunes had seen Wood remove the in-form KL Rahul and Rohit Sharma. And the visitors were in even greater trouble at 55-3 when Sam Curran captured the prize wicket of India captain Virat Kohli.

Cheteshwar Pujara (45) and Ajinkya Rahane (61), both of whom had previously struggled for runs this series, checked England's progress albeit it took them 59 overs to add exactly 100 for the fourth wicket.

Pujara's 206-ball vigil ended when a Wood delivery leapt off a length and lobbed gently to Root at second slip to leave India 155-4.

Rahane was then caught behind cutting off Moeen, who then bowled Jadeja with a superb delivery that turned and bounced to clip the top of the left-hander's off stump.

But, worryingly for England, Wood also had a shoulder injury that would need to be assessed in the morning after diving headlong into an advertising board when saving a boundary.

Mooen, brought back in place of dropped batsman Dan Lawrence to an attack missing star all-rounder Ben Stokes and fast bowler Jofra Archer, had 2-52 in 20 overs.

Shortly before play ended, the umpires appeared to suggest the game could not proceed if England took the new ball in the gathering gloom, even though the floodlights were on.

England, however, did not want to risk conceding runs in those circumstances, with Rishabh Pant 14 not out and Ishant Sharma unbeaten on four.

Rahul and Rohit had provided the bulk of India's first-innings 364 with 129 and 83 respectively.

But Rahul fell for five on Sunday when, having left the ball so well this series, he edged a 93 mph (150 kph) Wood delivery straight into wicketkeeper Jos Buttler's gloves.

Rohit drew India level when he pulled a 91 mph Wood ball for six. But trying to repeat the shot just three balls later, even though three fielders were out for the hook, he was well caught low down by Moeen, running in from deep square leg, for 21.

India were now effectively none for two.

Kohli, who had been in good touch, survived left-arm swing bowler Curran's review for lbw on height.

But still on 20 and seemingly playing for inswinger, Kohli edged a Curran delivery angled across him and was caught behind off a thin nick to spark a joyful run in celebration from the bowler.

Moeen Ali Cricket
Get the latest updates on IPL 2021, check out the IPL 2021 Schedule and Indian Premier League Live Score . Like us on Facebook or follow us on Twitter for more sports updates. You can also download the NDTV Cricket app for Android or iOS.