Highlights India vs England: India beat England by 203 runs. They now trail 1-2 in the five-match series. 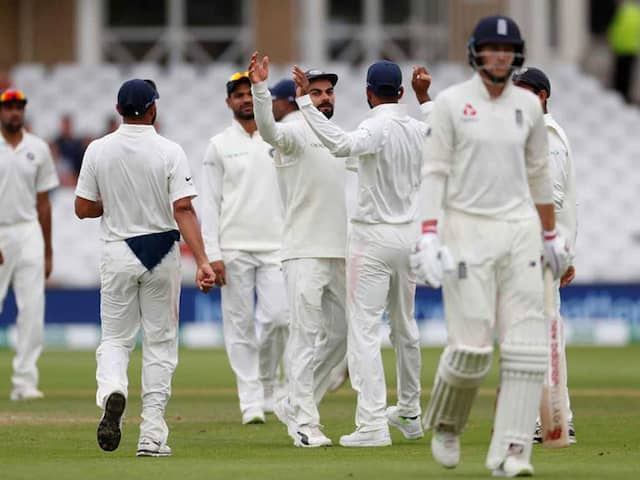 India produced an all-round performance to outclass England by 203 runs in the third Test at Trent Bridge on Wednesday. With this win, India now trail England 1-2 in the five-match Test series. Needing one wicket to win on the fifth and final day, Ravichandran Ashwin took the wicket of James Anderson (11) in the first session itself on the fifth day. On the fourth day, Jasprit Bumrah bowled a fiery spell and took his second five-wicket haul in international Test career. He finished with figures of 5/85. Ishant Sharma also took two wickets while Mohammed Shami, Ashwin and Hardik Pandya took a wicket each in the second innings. It was skipper Virat Kohli's superlative batting display (97, 103) that laid the foundation for the visitors. With the ball, Pandya (5/28) in the first innings and Bumrah (5/85) completed England's rout in the Test. (Scorecard)

Earlier on the fourth day, the last pair of Rashid and Anderson played nearly six overs. Flamboyant stroke players Buttler and Stokes curbed their natural instinct to added 169 runs in 57.2 overs in a show of grit and application. It was a tough period for the Indian bowlers as the two players were ready to grind it out. Buttler playing 176 balls with 21 boundaries but more importantly Stokes, who consumed 187 deliveries, hitting only six fours. (Play fantasy league and win cash daily)

15:35 IST: Mohammed Shami bowls the second over of the day. One wicket separates India from a win at Trent Bridge.

15:30 IST: Hardik Pandya begins the proceedings with the ball for India as Rashid and Anderson are at the middle.

15:10 IST: Before the fifth day gets underway, you may listen to what Jasprit Bumrah and Ishant Sharma had to say on their impressive showing with the ball.

15:03 IST: India are a wicket away from a much-needed victory against England.

15:00 IST: Hello and welcome to the live match updates of the fifth and final day of the 3rd Test between India and England.

While India were never in trouble but the period once again defined the beauty of Test cricket where it was once again proved why patience is the most important virtue for top teams. However, things changed dramatically after skipper Virat Kohli took the second new ball and Bumrah got Buttler and Jonny Bairstow (0) off successive deliveries. Buttler shouldered arms to an angular delivery expecting to go over stumps but it cut back sharply to hit the knee roll and was adjudged leg-before.

Virat Kohli England vs India, 2018 Cricket Live Score Live Cricket Score Live Blogs England vs India, 3rd Test
Get the latest Cricket news, check out the India cricket schedule, Cricket live score . Like us on Facebook or follow us on Twitter for more sports updates. You can also download the NDTV Cricket app for Android or iOS.