England beat India by 118 runs in the fifth and final Test sealing the five-match series 4-1. 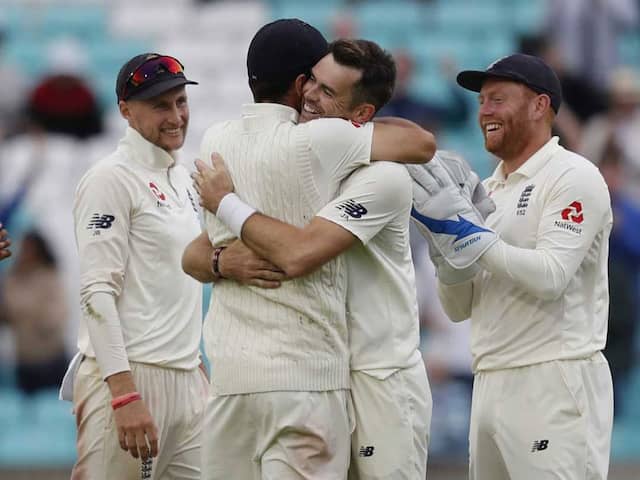 India lost the final Test against England by 118 runs Tuesday despite heroic resistance from KL Rahul and Rishabh Pant, bringing the curtains down on a tour which started as a golden opportunity but ended in a saga of disappointments. A mediocre England team with a fragile batting line-up won the series by a comprehensive 4-1 margin after India were bowled out for 345 in pursuit of a mammoth target of 464. Making amends for a below-par show in the preceding Tests, Rahul (149 off 224 balls) and Pant (114 off 146 balls) sang the redemption song with attractive centuries to raise visions of an improbable victory before Adil Rashid (2/63 in 15 overs) dashed their hopes with a twin blow.

Rashid bowled a prodigious leg-break that pitched on the rough and clipped Rahul's off-bail and in his next over Pant tried to hoick him for his fifth six only to be holed out by Moeen Ali.

Once the 204-run sixth wicket stand ended, India tried to hang on for a respectable draw but it was of no avail.

Root took the second new ball and his new 'Go To' Man Sam Curran (2/23 in 9 overs) promptly delivered by polishing off the tail with Ishant Sharma and Ravindra Jadeja being removed in quick succession.

Fittingly, it was England's senior-most bowler James Anderson (3/45 in 22.3 overs), who castled Mohammed Shami to end the match and also surpass Glenn McGrath as the highest wicket-taking pacer in Test match history. It couldn't have been a more emotional farewell for Alastair Cook as he led the team off the ground amidst a thunderous standing ovation from a knowledgable Oval crowd.

However there were a couple of times when it looked that India could at least earn a respectable draw if not a win.

Rahul batted in a cavalier fashion for the first time in the series as he added 118 runs with Ajinkya Rahane on a flat batting deck at the Oval. Rahane (37)'s indiscreet sweep shot followed by Hanuma Vihari's (0) dismissal saw India reduced to 121 for 5 before the complexion of the game changed once again.

Rahul was at his elegant best driving and cutting with a lot of ferocity including a slapped six over extra cover of Ben Stokes and four off the bowler to complete his fifth Test hundred.

However, in the post-lunch session, it was young Pant, who made amends for his poor glovework with some exhilarating strokeplay that included 15 boundaries and four huge sixes. Such was Pant's dominance that Rahul quietly dropped anchor letting Pant cut loose as he launched into England's spin duo of Rashid and Moeen Ali (1/68 in 17 overs). Pant muscled the ball through the gaps as England had attacking field set and forced them to get into a defensive mindset as they got free runs.

They weren't playing for a draw and with Stuart Broad's rib-cage injury, the other bowlers became easy pickings for Pant especially. He was audacious in his strokeplay and didn't let his shoddy keeping affect his batting.

The twin centuries also did the duo world of good as both are now sure to be a part of the squad against West Indies while Shikhar Dhawan's Test career looks to be heading southwards. England captain Joe Root did have a few things to worry but he knew that one wicket would lead them into the tail.

He delayed taking the second new ball which proved to be a master-stroke in the end as big leg-break found Rahul look back in a daze. Possibly Pant felt the need to keep going and having been successful in clearing the ropes on four occasions, he wasn't lucky the fifth time. But by then he had earned the love and respect of the spectators, who gave him a warm round of applause as he left the crease. The two knocks, however, would become a footnote in what turned out to be another humiliating English Summer for India where they lost both Test and ODI series.