KL Rahul equalled Rahul Dravid's record for most catches by an Indian in a Test series. 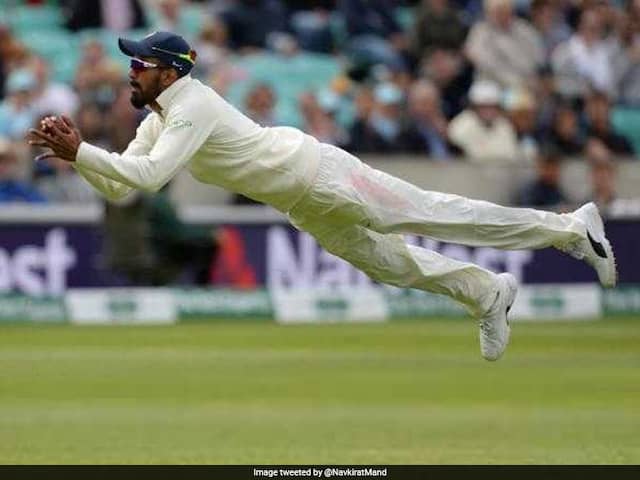 KL Rahul took a magnificent catch at mid-on during the second day of the fifth Test against England to become the first-ever cricketer to take 13 catches in a Test series in England. KL Rahul achieved this feat on Day 2 of the fifth Test against England at The Oval. Stuart Broad, who was batting alongside Buttler, tried to hoick Ravindra Jadeja over the mid-on for a boundary shortly after lunch. However, Broad miscued his shot and KL Rahul showed great athleticism to cover quite a ground as he ran backward and stretched full body to complete the catch. South Africa's John Ikin previously held the record of 12 catches.

Not only did KL Rahul become the first-ever cricketer to take 13 catches in a Test series in England but he also equalled Rahul Dravid's record for most catches by an Indian in a Test series.

Rahul Dravid had taken 13 catches in the Border-Gavaskar Trophy in 2004/2005 in four matches, while KL Rahul has 13 catches to his name in five matches.

Australia's JM Gregory leads the list of most catches in a series with 15 catches. He registered the record during 1920/21 Ashes series.

Greg Chappell stands second in the list with 14 catches.

KL Rahul, during the Trent Bridge Test, registered another record by taking seven catches in an innings - the most by any non-wicketkeeper in a Test in England.

Ravindra Jadeja, Ishant Sharma, and Jasprit Bumrah starred with the ball for India on Day 2 of the fifth Test as England were bundled out for 332 in the post-lunch session. While Jadeja picked up four wickets, Ishant and Bumrah returned with three wickets apiece.

Rahul Dravid Cricket England vs India, 2018 England vs India, 5th Test
Get the latest Cricket news, check out the India cricket schedule, Cricket live score . Like us on Facebook or follow us on Twitter for more sports updates. You can also download the NDTV Cricket app for Android or iOS.