India vs England: Virat Kohli, Shikhar Dhawan Show How To Do Bhangra The Right Way

India failed to bowl out Essex in 94 overs before Dhawan and Pujara suffered another batting failure on the final day of the one-off practice game. 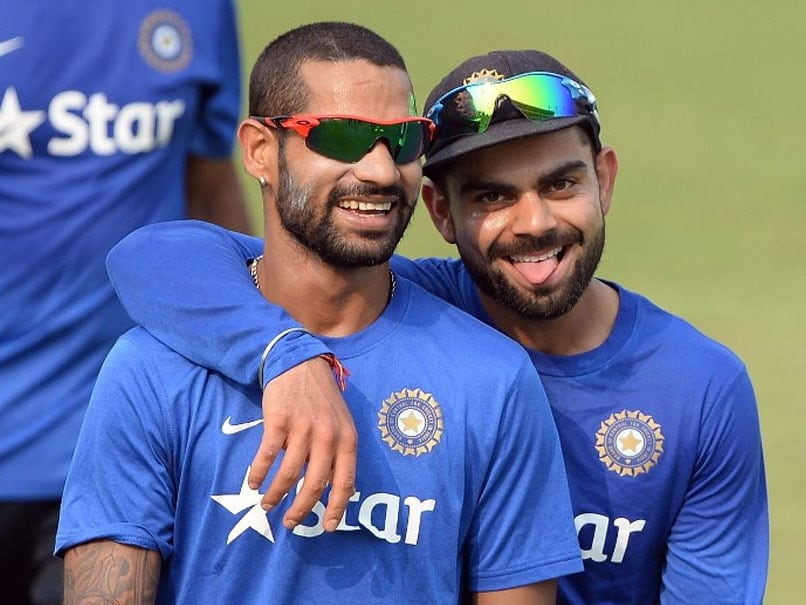 Kohli and Dhawan's bhangra steps drew rounds of cheers and applause from the crowd.© AFP

India's three-day tour game against Essex did not pan out exactly the way Virat Kohli's team wanted but it did not prevent the skipper and Shikhar Dhawan from enjoying themselves on the final day at Chelmsford on Friday. In a beautiful gesture, the visiting team were welcomed with dholbeats by an Indian section to which Kohli and Dhawan responded immediately with a few bhangra steps that drew rounds of cheers and applause from the crowd. The lack of runs from Dhawan and Cheteshwar Pujara and an injury scare to Ravichandran Ashwin might have compounded to Kohli's worries but he was all smiles when he made his way to the field.

Two @BCCI players have enjoyed their time at Chelmsford!

India failed to bowl out Essex in 94 overs before Dhawan and Pujara suffered another batting failure on the final day of the one-off practice game, leaving the visitors with plenty to ponder ahead of the first Test that begins in Edgbaston on August 1.

Essex, resuming day three at 237/5, went on to frustrate the Indians for 36 overs before declaring at 359/8, 36 short of the visitors' effort in the first innings. The play on the final day was called off one and a half hours before the scheduled time due to rain, with India reaching 89/2 in 21.2 overs.

The game ended rather abruptly, thanks to the first spell of rain in Chelmsford in two months. Perhaps the biggest news of the day, however, came in the pre-lunch session when R Ashwin (0-21) bowled five overs.

He overcame the minor finger injury sustained in the nets on Thursday and took the field for a first time in three days, much to the relief of the team management. Ashwin bowled with decent control on a slow wicket not yet affording turn and looked the best out of three spinners on display.

Kuldeep Yadav (0-24) had also bowled in the morning session, his first outing in this game as well. But Walter (75 runs, 123 balls, 13 fours, 1 six) got stuck into him, hitting three fours and a six in two overs, as he attacked the wrist spinner. It was surprising that the spinners bowled only 11 out of 94 overs India sent down in the Essex innings with Ravindra Jadeja (0-17) not bowling on this final day.

Virat Kohli England vs India, 2018 Cricket
Get the latest updates on India vs Australia and check out  Schedule, Results and Live Score. Like us on Facebook or follow us on Twitter for more sports updates. You can also download the NDTV Cricket app for Android or iOS.